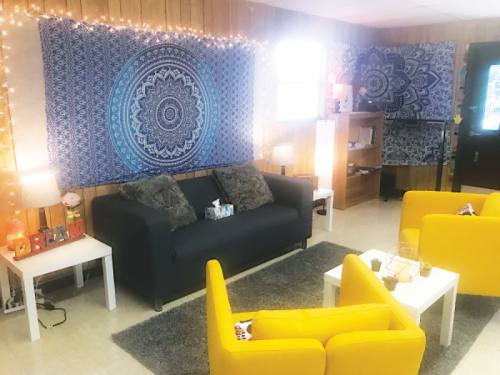 Mental health centers are designated rooms on district campuses where licensed mental health professionals, such as psychiatrists or therapists, meet with students, families and staff to work through mental health barriers that could be affecting the student.

Services at the centers are free to students and parents, and staff at the centers work in conjunction with traditional school counselors, parent support specialists, school nurses and other school employees, said Twyla Williams, AISD administrative supervisor of counseling and crisis.

“[The centers] create a community of care in our campuses where we link together,” she said. “At the end of the day we all have that same goal: We are all wanting that student to be successful and to heal that hurt [they have].”

Established in 2011 as a pilot program at Crockett High School, mental health centers had opened at 18 AISD campuses by the start of the 2017-18 school year, according to AISD spokesperson Cristina Nguyen.

According to a 2012 study by Dell Children’s Medical Center, the schools are located in ZIP codes with higher crime rates, language challenges and higher levels of child maltreatment.

“By providing mental health services on campus, we are able to identify, support, and efficiently provide clinical treatment for our students experiencing a variety of mental health issues,” Spinner said.

Minne said the goal of the program is to have licensed therapists provide deeper, more individualized care than what would be offered through a traditional school counselor. She said therapists look at student behavior empathetically instead of relying on punitive tactics, such as suspensions, which bar students from being in the classroom and learning.

Since expanding the program in February, she said the new mental health centers have served over 1,400 individuals.

“Our goal is not only to do therapy with kids and to help them individually, but to really create a whole climatic shift on our campuses,” Minne said. “For every student that we serve we also work with the adults in their lives.”

Having centers on campus allows for better coordination of services, Williams said. It also allows students to take advantage of services during the school day, eliminating potential scheduling or transportation conflicts that could be created if centers were off-site.

School counselors are still the first line of defense in helping identify what may be bothering a student, but Williams said once it is determined a student needs specified attention, he or she could be referred to a center.

Based on data collected since 2011, Minne said students who have spent a year using mental health center services show a significant decrease in anxiety and depression symptoms as well as increases in positive relationships with their peers. Students in the program have increased graduation rates; improved academic achievement; and lowered both drop-out rate and suspensions, Williams said.

Minne said she hopes mental health centers will expand to all AISD schools in the future.

“Mental health does not discriminate. It’s present at all of our campuses regardless of money or demographics,” she said. “I think any estimation of the need [for mental health services] is an underestimation.”