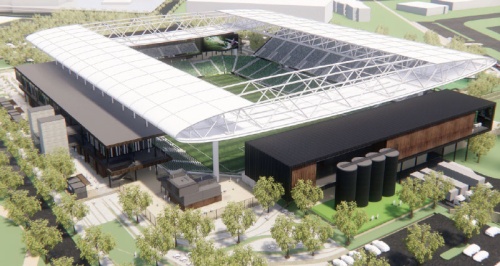 Austin City Council postponed a vote on an agreement to bring a Major League Soccer team to the city.

Austin residents filled City Hall Thursday night expecting a final decision on whether the city will allow a Major League Soccer team to build a stadium on city land at McKalla Place in North Austin.

The discussion began in the fall when Anthony Precourt, investor-operator of the MLS Columbus Crew SC team expressed his interest in the city, and it will continue for at least six more days.

Council postponed a vote on an item that would authorize staff to negotiate and execute an agreement with Precourt Sports Ventures, choosing instead to take up the issue on Wednesday morning at 9 a.m.

After hearing more than two hours of public testimony, council members submitted more than 20 amendments to the agreement negotiated under a term sheet between city staff and PSV. To give council members more time to review those amendments, council agreed to take the extra week.

Mayor Steve Adler said some of the amendments would, on their own, make the stadium deal economically inviable for PSV, a characterization that District 7 Council Member Leslie Pool rejected.

“Some of the things being proposed are clearly poison pills," Adler said. Pool asked the council to “refrain from that kind of terminology.”

Much of the debate Thursday night centered around PSV’s support of girls soccer programs in the city. Under the amended term sheet released Wednesday, PSV pledged $36.4 million for its league-mandated youth development academy for boys. Some council members asked local attorney and PSV representative Richard Suttle how much money was going to female athletes in the community.

Buck Baccus, president of local youth club program Lonestar Soccer Association, said said his academy has a “binding agreement” with PSV to support our the programs.

However, Baccus and Suttle each declined to provide specific details of the agreement.

“What you’re asking us to do is to disclose an agreement between two private parties and we’re not prepared to do that,” Suttle said.

However, Suttle said that PSV “blundered” when classifying the boys youth development academy as a community benefit in the term sheet, and at the city’s direction PSV looked into pledging more support to girls academies in the city.

The term sheet council is deciding upon would not bind the city of Austin and PSV into a legal agreement. However, Wednesday’s vote is the final action required by council to approve an agreement with the club. If the ordinance passes, staff would be authorized to negotiate the final lease and development agreement that would bind the two sides to terms.

The initial term sheet that laid out an agreement between the city and Precourt Sports Ventures was released on July 27. Under those terms, PSV would finance the construction of the stadium, while the city would retain ownership of both the land and stadium, exempting PSV from property taxes. Under the terms, PSV would pay $550,000 per year in rent beginning in the sixth year of its initial lease.

Late Wednesday night, the city posted a revised term sheet. Among the changes was a new nonrelocation clause stating PSV would have to pay the city $1 million multiplied by the number of lease years remaining in the agreement or be responsible for demolishing the stadium and bringing it back to a developable condition.

On Tuesday, council heard proposals on six other concepts for the McKalla Place site, including mixed-use developments and alternative options for soccer.