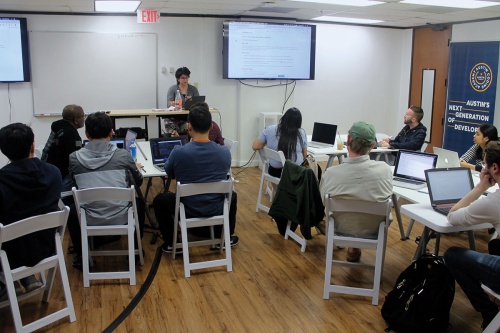 Students at Austin Coding Academy and other coding bootcamps around the city learn skills to transfer toward a career in Austinu2019s tech industry.

Employers in Northwest Austin—such as Dell, IBM, Apple and Seton Healthcare Family—have openings for some of the most in-demand jobs in the city, including many that do not require a bachelor’s degree, the Greater Austin Chamber of Commerce reports.

Some education and workforce-development leaders in and around Northwest Austin say the demand for these jobs from area industries presents an opportunity to help students and job seekers find employment without a traditional four-year degree.

“Even if students have a four-year degree, that by itself used to have value,” said Craig Shapiro, associate superintendent for high schools at Austin ISD. “It’s not as valuable anymore without all of this other mentorship, work shadowing and direct pipeline to an employer.”

Workforce Solutions of the Capital Area, an organization that analyzes labor data, estimates the number of jobs available requiring more than a high school diploma but less than a bachelor’s degree in the Austin metro is expected to grow to 60,000 by 2021.

Northwest Austin school districts and job-training programs are preparing the next generation of middle and highly-skilled workers by launching new programs in high schools and providing mentorship alongside coding bootcamps and community college courses.

“We expect possibly 15 more of these programs to be open across the entire city in the next three years,” he said.

All of Northwest Austin’s school districts—AISD, Pflugerville ISD and Round Rock ISD—offer CTE programs. Certain AISD and RRISD campuses are designated early college high schools, meaning they have programs that allow students to graduate with a high school diploma and an associate degree from Austin Community College.

The number of CTE students in ninth through 12th grade increased by 87 percent in Texas between the 2007-08 and 2017-18 school years, according to the Texas Education Agency. Total enrollment increased by 16 percent.

One program offered by all three districts lays the foundation for students to pursue an apprenticeship in a skilled trade, which is among the most in-demand jobs in Austin that does not require a bachelor’s degree, according to Workforce Solutions.

Savannah Marvets, a PfISD graduate and fifth year-apprentice with Plumbers & Pipefitters Local Union 286, got her start in a skilled trades CTE program. She said she eventually wants to save up enough money to buy her own ranch.

“I didn’t want to go to college if I didn’t know what degree I wanted to get and waste all this money,” she said.

Workforce Solutions predicts demand for plumbers and pipefitters will grow by 24 percent by 2026.

In 2017, the Texas Legislature passed a bill to allow school districts to apply for grants from the TEA to designate a high school as a Pathways in Technology Early College High School, or P-TECH, school. P-TECH schools offer associate degree dual-credit programs designed in partnership with IBM. AISD earned grants to introduce two P-TECH campuses, including one at Lanier High School in North Austin.

Many job-training programs help people gain skills over time so they can move up into higher earning positions.

Chris Lofton, CEO of Austin Coding Academy, a coding boot camp, said he works with tech companies to adjust curriculum to the needs of the industry.

“We look to partner with companies who want to develop employees,” Lofton said. “They think long-term and say, ‘I want to hire a mid-level [employee] in three years, so I’m going to hire three juniors or three interns and pick one to develop into a mid-level employee.”

The five-year journeyman program at Local 286 allows apprentices to work while gaining certifications to become the type of highly skilled worker that Austin-area contractors need.

“Our [master certified plumber] workforce is aging out,” Thornton said. “Numbers-wise here in Austin, our average age is about 39-40 years old.”

“If a student gets a good job but took on $100,000 in debt, they may be able to afford a better lifestyle, but they can’t accumulate wealth because they’re spending the first 10 to 15 years giving it back to pay off loans,” he said.

Thornton said he is glad he left college to pursue a trade.

“There’s a stigma that if you work physically for a living, you’re not doing as well as you are if you’re wearing a suit and tie,” he said. “But we make more than a lot of those guys, and we don’t have any college debt.”

“They have to hire and onboard new employees, but now they don’t have that much of a cost because they already onboarded [students] over the last four to six years.”

Katie McNeil, a software engineer in Austin who got her start with a coding boot camp, said she is glad her employer was willing to consider her despite her lack of a bachelor’s degree. She said hopes more employers will start to do the same.

“If [employers] don’t come from a nontraditional background, it’s harder for them to consider others from a different background,” McNeil said.

Shapiro said he sees alternative paths as a staple rather than a trend.

“[Austin] has a number of industries and a growing community of people who want to do things differently not for the sake of being different but to meet the needs of kids and their future,” he said.