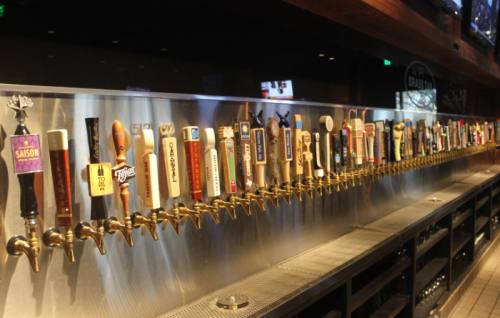 The Brass Tap has 100 craft beers on draft.

When owner Steve Sheets opened the second location of craft beer bar The Brass Tap at The Domain, he said he wanted to maintain the neighborhood bar feel of his location in Round Rock.

He said the restaurant and bar is a place for customers to hang out, watch sports, enjoy happy hour, play trivia, sing karaoke, and host private events for friends and family. What makes guest stay a while, however, is the 100 taps of craft beer, Sheets said.

“Our goal here is that our servers aren’t order-takers; they’re tour guides,” Sheets said. “The thing we take great pride in is being able to guide a novice in choosing the beers that they like.”

The draft beer menu, which changes daily based on availability, features local brewers, and Sheets said he does not have to go far to find nearby brewers.

“Every brewery that is within a mile or so of us is represented on our tap and represented well,” manager Lewis Smith said.

“We’re lucky where we are,” Sheets said. “We’re right in the middle of one of the best beer markets in the country and maybe the world.”

His next goal is to construct an on-site brewery with the intent of hiring a brewer to make an in-house beer just for The Brass Tap.

Sheets said he hopes he can also accommodate local brewers who want to create a new batch on-site and host events for guests to sample beers and learn from the brewers. If all goes as planned, Sheets said the on-site brewery will open in three to four months, making it the only brewery at The Domain.

With craft beer as The Brass Tap’s appeal and quality bar food such as burgers, wings, wraps and tacos encouraging guests to stay, Sheets said he sees the restaurant becoming a mainstay at The Domain.

“One of the things that I think is absolutely true is that craft beer is not a fad; it’s a trend, and it’s here to stay,” Sheets said. “We’ve just barely scratched the surface in terms of potential craft beer drinkers.”