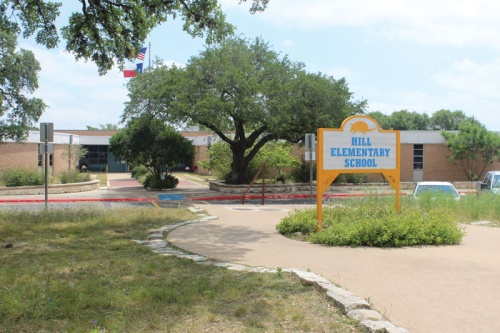 Hill Elementary School is one of three Austin ISD schools in Northwest Austin that will be updated as part of the district's 2017 bond.

Throughout Northwest Austin, outdated and overcrowded schools in three districts are in various stages of improvement using funds from voter-approved bonds.

Northwest Austin residents live in a section of the city that straddles the Travis and Williamson county line and also three public school district boundaries: Austin ISD, Pflugerville ISD and Round Rock ISD. Each school district has faced different hurdles in procuring and allocating bond funding to move forward with construction projects.

PfISD included an ambitious amount of improvements in its 2014 bond in anticipation of rising construction costs in the area.

Following a failed 2017 bond proposition, RRISD is reshaping its bond proposal for another attempt at voter approval in November 2018 or May 2019.

AISD voters approved the school district’s largest bond to date last November. Although the 2017 bond proposal—developed with input from a community bond oversight committee, or CBOC—topped $1 billion, it will not raise AISD’s tax rate, according to the district.

The bond includes a wide range of improvements throughout the district, but for the Northwest Austin campuses, the priority is addressing overcrowding.

“This is an area that is experiencing unprecedented growth,” Cowan said.

Construction priorities from the 2017 bond package are based on “worst first” criteria. Some projects with urgent needs began in January within the fiscal year 2017-18 budget. AISD plans to start smaller-scale projects in FY 2018-19 at three Northwest Austin schools.

Among the 10 comprehensive construction projects—meaning funding is allocated for construction of large-scale high-priority projects—throughout the district slated for FY 2018-19, Doss Elementary School construction will begin in August, according to AISD. It is currently operating at 154 percent capacity.

Doss’ comprehensive plan totals $43 million and includes the addition of a wing for academic and administrative spaces, a new track and a parking lot. Existing athletic, cafeteria, outdoor and media-related spaces will also receive improvements.

AISD also lists 35 critical facility deficiency projects, including smaller projects at Hill and Murchison, scheduled for improvements in FY 2018-19. Major construction at Murchison Middle and Hill Elementary schools will begin in August 2019 and June 2021, respectively, but will require additional funding from a future bond to complete the full plans.

Although Hill is at 138 percent capacity for the 2017-18 school year, it has not received funding for a comprehensive plan because the bond committee considered building a new school to reduce crowding at Doss and Hill but could not secure land along Loop 360 where they hoped to locate it, Cowan said. More funding for a comprehensive project for Hill would need to be included in a future bond.

When major construction begins in June 2021, Hill will receive a new administrative  and athletic spaces and improvements to its cafeteria and library using over $17 million in funding from the 2017 bond.

Projects at Hill begin with $724,000 in updates to the electrical and heating, ventilation and air conditioning, or HVAC, systems in FY 2018-19.

Improvements to Murchison will total $25.3 million and include an addition of a new sixth-grade wing. In FY 2018-19, the district will spend $965,000 on architectural renovations and updates to Murchison’s HVAC system. The new wing is scheduled to begin construction in August 2019.

“We’re excited to have our building become a more supportive learning environment for our teachers who are already doing amazing things,”
Clark said.


Pflugerville ISD ahead of growth

PfISD’s 2014 bond was ambitious in its scope because administrators and bond committee members saw construction costs rising in the area and did not want to wait for another bond to include several high-priority projects, PfISD officials previously told Community Impact Newspaper.

PfISD is finishing 2014 bond projects and the district has not confirmed if it will pursue a new bond soon.

Most of the remaining construction is taking place outside of North Austin’s feeder pattern; however new concession stands will be added at John B. Connally High School’s baseball and softball fields this summer.

One notable project from PfISD’s 2014 bond is the new 10,000-seat football stadium known as The Pfield, which was completed last May and serves the entire school district. It features a press box with multiple private boxes, a 7,000-square-foot field house and three concession stands.

Round Rock ISD’s Westwood and McNeil high schools are both undergoing construction to complete their master plans.

Westwood’s master plan was developed in 2006, and three phases were funded in the 2006, 2008 and 2014 bonds. Phase 4, the last stage of the master plan, was included in a 2017 bond package that failed to receive voter approval last May.

Although the master plan is nearly complete, the bond committee that put together the $572.09 million 2017 bond package deemed Phase 4 of the project crucial enough to be included in the bond. RRISD Chief Financial Officer Randy Staats said he does not anticipate it would be left out of a future bond package.

“Once we start a master plan we want to finish it, so that was part of the reason why [Phase 4] came forward in the last bond. It has definitely garnered some attention and discussion in the CBOC process,” Staats said.

McNeil has faced more obstacles than Westwood in completing its master plan. It received funding from the 2014 bond for Phase 1 of construction, and Phase 2 was included in the failed 2017 bond. Approval of a future bond is required to move into Phase 2, Staats said.

The McNeil project faces unique challenges due to its location.

“There’s a lot of other jurisdictions involved because the county line runs right through the middle of that building,” Staats said. “We’ve got Williamson and Travis [counties] both involved in the project, and they’ve got their teams of folks that require certain things that are different from one county to another.”

McNeil also has land that sits above a cave system determined to be home to an endangered species of invertebrates. Having this endangered species within campus boundaries resulted in a series of negotiations among the U.S. Fish and Wildlife Service, the Travis County Natural Resources department and RRISD, RRISD Construction Director Terry Worcester said.

Even though the cave is located far from the main building and on the outskirts of campus, it dictated the order of projects completed and which ones could and could not move forward before the land was granted to a government entity for protection, Worcester said.

For this reason the agricultural facilities, such as a swine barn, and HVAC improvements were completed first. Other Phase 1 exterior projects had to be delayed.

The land is in the process of being granted to the Travis County Natural Resources and construction began on Phase 1’s exterior improvements, including the new special education wing in summer 2017.

“It’s a very unusual construction project, and certainly we wanted to move forward as quickly as possible but we also have a lot of hoops to jump through to get there,” Staats said.