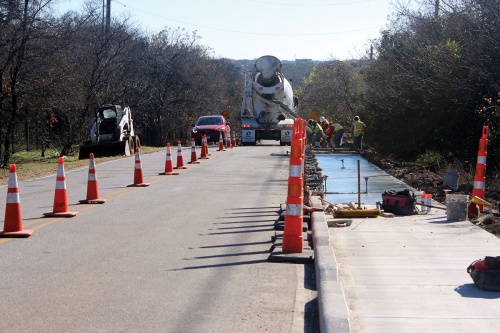 Austin City Council will start the approval process in late March of a new citywide transportation plan. This plan will include proposed new roads and other multimodal projects such as sidewalk facilities.

It has been 24 years since Austin City Council last approved a transportation plan, long before ride-hailing, bike-sharing and scooters became commonplace in the city.

Now, the Austin Transportation Department is wrapping up two years’ worth of creating a new plan, called the Austin Strategic Mobility Plan, for which council is scheduled to start the approval process in late March.

This plan takes a comprehensive look at the city’s transportation challenges and aims to arm the city with new tools to tackle those challenges and submit projects when funding opportunities arise. It also sets an ambitious goal of reducing the number of residents driving alone in the next 20 years, said Annick Beaudet, assistant director of the transportation department.

“If 50 percent of people in [2039] drive alone and 50 percent do a combination of anything else—which is carpool, vanpool, telework, bike, walk, take transit—then we start to manage our congestion,” she said.

Beaudet added that goal is realistic because currently about 74 percent of people drive alone, according to the U.S. Census Bureau.

In Northwest Austin’s council District 6, choices for commuting are more challenging because the area is classically suburban, Council Member Jimmy Flannigan said. Capital Metro has several MetroExpress commuter bus routes that operate from the Leander and Cedar Park areas down US 183 and into downtown.

Flannigan said he tries to take the Express bus when he can. Those buses will benefit from the US 183 North toll project set to start construction in spring 2020 to build two toll lanes in each direction between RM 620 and MoPac.

Because half the population would still need to drive alone, Beaudet said the transportation plan also includes suggested locations for where new roads could be built to provide better connectivity.

“Everybody needs to have the most time-efficient and reliable option or commute depending on the mode that they choose,” she said.

A lack of connectivity is a common problem with many District 6 neighborhoods as well as near the Robinson Ranch area and the future site of Apple’s second campus off Parmer Lane, Flannigan said.

“We’re working to make sure that [Robinson Ranch] builds out with parallel lines to Parmer,” he said.

Many residents of Northwest Austin also want to see their transportation options increase. In a Community Impact Newspaper query in early February on Nextdoor about what improvements they want to see, more than 50 residents responded with a variety of answers.

Several residents said they want more bike lanes or better-protected bike lanes, including along Anderson Mill Road, as well as increased transit choices. Resident Sarah Miller-Fellows said having bike lanes and transit options on Anderson Mill Road would allow her to bike more with her children and make shorter trips without using her vehicle.

“As the area continues to grow it’s just going to become even a more important roadway with the Apple campus coming,” she said.

“From Thurmond [Street] to Payton Gin [Road], about a half-mile stretch, pedestrians need to navigate five lanes of dense traffic,” he said. “Note there are lots of affordable apartments on the west side of Lamar and businesses on the east side. I have seen many pedestrians standing in the center lane waiting to get across.”


How to use the plan

Once the plan is approved, Beaudet said council would next consider implementing a street impact fee, which is allowed under the local government code. Cities are permitted to implement an impact fee for roadways, drainage and water, and Austin currently only has a water impact fee.

The street impact fee would be charged to developers wanting to build a project. The maximum allowable fee is calculated by dividing the cost of the associated transportation projects by the forecasted population within a service area—about 6 square miles. Council would have to approve a policy to determine how to assess and collect this fee.

“It’s a really predictable, transparent and fair way to have growth pay for growth with regards to development,” Beaudet said.

Next, council would need to adopt administrative criteria to prioritize projects. Because projects listed in the mobility plan are also unfunded, they would still need to go through the public engagement process and a more detailed engineering study before the city implements any proposed projects.

“By the end of 2019, we should have a brave new world of tools for addressing our transportation challenges,” Beaudet said.

View the draft of the comprehensive transportation plan here.