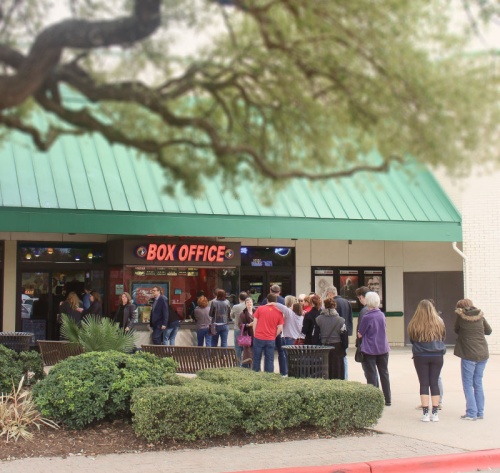 The fate of a Northwest Austin movie theater and changes to a key retail center will be coming back to Austin City Council in February.

A developer is proposing to transform the Great Hills Market retail center into a mixed-use development. The requested zoning change case would allow the developer to include residential units on the property.

Residents should not expect much change in 2018, said Amanda Swor of The Drenner Group, the land use law firm representing the developer.

Phase 1 of the proposal includes 372 apartment units, up to 16,000 square feet of restaurant space and up to 10,000 square feet of retail space. This phase will take place on the sites of the Regal Arbor 8 @ Great Hills movie theater and Manuel’s Mexican Restaurant, according to Swor.

Swor said Phase 1 would not begin until the Manuel’s lease expires, which is through 2020 with an option to extend for five years. Regal Arbor 8’s lease also ends in 2020, said Tony Chron, who represents the developer, Great Hills Retail Inc. Phase 2 would transform the existing retail buildings at a later date, Swor said.

On Jan 29, after Community Impact Newspaper's print deadline, a representative for the owners of Manuel's confirmed they chose to extend Manuel's lease through 2025 on the site. The restaurant also celebrates the 20th anniversary of the Jollyville location this year.

“We just renewed our lease at Manuel’s Downtown, and we own our building on Jollyville Road with almost a decade left on the ground lease," founder and co-owner Greg Koury said in a news release. "We are open for business and look forward to the future as our community continues to grow.”

At a public meeting held by District 10 City Council Member Alison Alter on Nov. 1, many of the more than 75 attendees expressed concern over increased traffic if apartments are added. Others are concerned about losing the Regal Arbor 8 @ Great Hills cinema, which has a reputation for showing independent films.

On its first reading before City Council on Dec. 14, the zoning change case was passed unanimously with conditions added by Alter. These include prohibiting the addition of a drive-thru restaurant on Jollyville Road, adult-oriented businesses, alternative financial services and short-term rentals.

The zoning change is not officially approved until it goes to a vote after two more readings either at the same City Council meeting or at two separate meetings.

Alter stated in a release that she would have to see greater traffic-mitigation plans before she could vote in favor of the zoning change.


Traffic, schools and the fate of Arbor 8

Area residents have expressed concerns over crowded schools near the development. According to an educational impact statement from Austin ISD, the district predicted the construction of 362 multifamily units would result in adding 23 total students to Austin ISD at Hill Elementary School, Murchison Middle School and Anderson High School. Hill Elementary School would be deemed above target capacity, the statement reported.

In response to traffic concerns, the developer is still deciding if any more studies on Phase 1 are necessary, Swor said. A traffic study on Phase 2 would not begin until the permitting process begins for that phase.

Dan Hennessey, with Big Red Dog engineering firm, said that the intersection at Jollyville Road/Great Hills Trail does not have any room to add turning lanes. The best option is to pay the city to update traffic signal timing at surrounding intersections, he said.

If implemented, the suggested signal improvements would be made after Phase 1 is complete.

Following the redevelopment of the Regal Arbor 8 theater, Chron said incorporating a new theater in the project is not economically feasible.

“The future of retail is not known, so we don’t know how long these stores will last or how long the theater will last,” he said. “… When [Regal Entertainment Group’s] lease runs out [in 2020], we’re at [Regal’s] mercy.”

Editor's note: This post was updated to include more information from Manuel's.