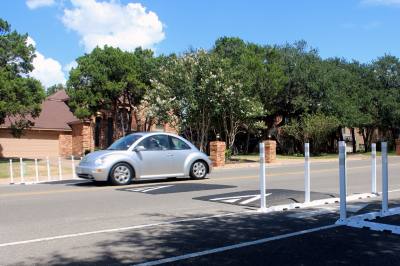 The city of Austin installed speed cushions in July 2017 on Jester Boulevard at the request of residents. However, other neighborhood residents protested the installation, and the cushions were removed Jan. 10.

City of Austin crews began removing speed cushions Jan. 10 that were installed six months ago in the Jester neighborhood of Northwest Austin.

The installation garnered protests from residents who organized a petition and contacted the city with their complaints.

That prompted District 10 Council Member Alison Alter to step in and work with city staffers on pausing the Local Area Traffic Management program’s installation of new speed cushions to reassess the process and criteria used for installing traffic-calming measures such as speed cushions, which are black rubber devices installed in the street.

Residents protested the speed cushions primarily because of the discomfort of driving over the cushions and because Jester Boulevard is the main road in and out of the neighborhood.

The city reassessed several recently completed speed cushion projects, including those on Far West Boulevard and Mesa Drive, but determined those cushions will remain. The city only installs speed cushions at the request of residents and after the city completes a speed study determining speed cushions are appropriate.

An Aug. 10 city memo outlined several changes to the program, including more scrutiny for collector streets and minor arterials and notifying council members and residents of upcoming projects.

In February, the city plans to install more speed cushions on Beauford Drive that connects the Jester neighborhood with the Lakewood neighborhood and to Loop 360. Monroy said speeding on Beauford is not as significant as on Jester but that it is a project identified by City Council.

“Beauford is a more narrow street and more typical of our neighborhood streets,” Monroy said. “It was funded through the Quarter Cent [Fund] process, and Quarter Cent [projects are] council mandated.”

The Quarter Cent Fund is money leftover from Capital Metro’s failed light rail bond in 2000. The transit agency agreed to share a quarter of its revenue for a period of time with the city, which opted to use it for low-cost projects that would help with congestion relief and traffic safety.

The city did drop plans to add speed cushions on Mountain Ridge Drive but is planning to build roundabouts at Perry Lane and Fairview Drive just south of Hancock Drive and at Lakewood and Driftwood drives near Loop 360 and RM 2222. The Lakewood project also includes medians.

The roundabout projects are designed and permitted but staffers still need to consult with the Austin Fire Department before construction commences, according to the transportation department.

Below is a map of Northwest Austin-area speed cushion projects. Those in red are completed, those in green are funded but not yet installed, and those in purple are being removed or not being built.