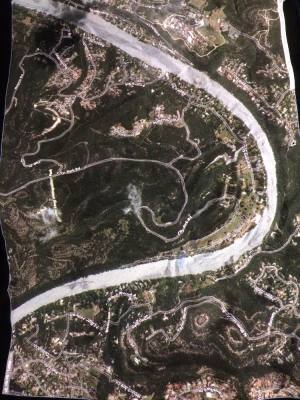 The Jester Firewise Committee, a committee of the Jester Homeowner's Association, announced the date and time of the live webinar featuring Austin Fire Department's 3D SimTable demonstration. The webinar will take place on Dec. 7 at 7 p.m. at www.jesterhoa.com/firewise-webinar.html.

Representatives from the Austin Fire Department presented a 3-D wildfire simulation to members of Northwest Austin-based Jester Homeowners Association on Saturday, Dec. 2 in preparation for an upcoming webinar available to the public.

The Austin Fire Department received a $70,000 grant from the Federal Emergency Management Agency to purchase a Simtable, a 3D educational tool used to simulate potential wildfire patterns in specific geographical areas, according to a Nov. 30 news release.

The tool consists of a projector that projects maps onto a table with sand molded into shapes that represent the geographic features of the map, creating a 3D display. With the accompanying software, simulations can depict how wildfires would spread in various situations.

“The Jester neighborhood in Austin will be using the Simtable in a first-ever online broadcast at a later date to emphasize the importance of wildfire preparedness and to motivate homeowners to take actions that will reduce their wildfire exposure risk,” the release stated.

The demonstration will also display the impact of specific vegetation in the area on the speed of potential wildfires, and that will help officials and community members plan a healthy landscape and identify areas of concern, said Captain Josh Anderson of AFD's wildfire division.

“This technology helps fire department pre-plan for specific scenarios that then can be more effectively communicated and trained by simulating a real response to a particular high-risk community or neighborhood,” Anderson said.

The date of the webinar displaying the simulation has not been announced.
SHARE THIS STORY