Emerald Tavern Games and Cafe owner Erich Weidner stands in front of tables and chairs the restaurant has had stow away as it reopens at a limited capacity. (Iain Oldman/Community Impact Newspaper)

Just before noon on May 2, a lone customer wearing a protective face mask walked into Emerald Tavern Games and Cafe in North Austin, ordered a beer at the bar and sat down at a table to drink it.

That customer, owner Erich Weidner said, was the first to be served food or drink inside his restaurant since March 17.

That day, which Weidner called the "second-worst day" of his life, he had to lay off dozens of staff members as the restaurant ceased dine-in services in compliance with orders from the city of Austin and Travis County.

“It’s nice to see someone drinking something here who isn't an employee,” Weidner said.

Following an executive order from Gov. Greg Abbott that allowed Texas restaurants and retail stores to open with limited capacity, Emerald Tavern worked to welcome back customers at the first opportunity available, returning with a soft opening May 1.
RELATED STORIES

• DATA: Austin not hit as hard by sales tax revenue dip compared to other Texas cities

Weidner said it was an easy decision, as his business needs a lifeline and will take any chance to rake in revenue. While Emerald Tavern continued curbside pickup service for its food offerings throughout the state-mandated closures, Weidner said he collected the same amount of revenue throughout April that he collected in just four days in February.

Things were so bad, Weidner told Community Impact Newspaper, that at one point he was a week away from closing down Emerald Tavern for good. At the eleventh hour, as payments were racking up for his business, Weidner received emergency federal aid through the U.S. Small Business Administration’s Payroll Protection Program.

“We’re just hoping that the economy is going to recover enough to at least tread water. That’s what everybody is trying to do,” Weidner said.

According to publisher market shares data from Diamond Comic Distributors, sales of comic books and graphic novels throughout March dropped more than 8% compared to March 2019.

“It’s like our Christmas where we prepare for that and expect for it to be a very large event,” said Drake Siegel, purchasing manager for Dragon’s Lair Comics and Fantasy in North Austin.

Free Comic Book Day is one of hundreds of events local gaming stores have had to cancel or postpone during the coronavirus pandemic. These businesses host community events for novice and veteran hobbyists alike, who gather to play board games with friends, role-play in adventurous campaigns and paint miniature figurines.

“Our secret sauce is the combination of all the things we do. We are really a community built around our hobby,” Weidner said.

Despite the governor allowing them to open up their stores, most gaming and comic book stores are choosing to keep that community at a distance—for now.

Most gaming and comic book stores across Austin took a pensive approach and did not open until May 4. Those few extra days, the owners of those establishments told Community Impact Newspaper, were necessary to prepare their businesses for browsing customers and the risk of coronavirus that comes with them.

Titan Moon Comics in Cedar Park reopened May 4 with a limited capacity smaller than the 25% capacity bar set by the governor. Assistant store manager Haley White said a maximum of 10 customers at a time can enter the store to shop, and social distancing will be required for those inside the store.

On top of that, Titan Moon Comics is sanitizing the store on an hourly basis.

“Two employees will go through at a time and sanitize the store top to bottom. We use a disinfectant spray and make sure everything is wiped down,” White said.

In North Austin, Dragon’s Lair is also capping the number of people inside its store at one time to 10, but that includes employees.

“It will be closer to five customers at a time,” said Siegel. “We’ll be encouraging people to take advantage of our curbside [service,] as well as shipping.”

The two comic book stores face a unique challenge in sanitizing inventory as customers come in and browse through comic books, board games, paint for miniatures, dice and more. Dragon’s Lair has purchased equipment to sanitize products handled by customers with ultraviolet light, but the store is also asking customers to collect anything they have touched and bring it to the counter, even if they do not intend on buying it.

“The concern of being able to keep up with the customer and how much they’re interacting [with inventory] played a strong factor in narrowing down our target number even further [than 25% capacity,]” Siegel said.

Game Over Videogames in North Austin, located just down West Anderson Lane from Dragon’s Lair, is letting in just three people at a time. The business is additionally mandating all customers wear masks while shopping, store associate Derek Rider said, and will have to place anything they have interacted with inside a tote to maintain sanitation.

Currently, Game Over Videogames is not accepting trade-ins of used video games—an essential component of the used game store’s business model. And like other stores around Austin, the video game retailer is still offering curbside retail for its customers as a means to minimize person-to-person contact.

“We’re trying to be flexible and smart about it,” Rider said. “People want to come in. They want to shop.”

Bell’s Gaming Center, nestled in a small shopping center off I-35 in Round Rock, opened its doors to customers May 1, similar to Emerald Tavern.

For now, however, the business will not host any in-store events, such as Magic: The Gathering games, video game tournaments or board game nights.

“We’re not having any events in the store, but people can come into the store,” owner Michael Bell said in an April 28 video posted on Bell’s Gaming Center’s Facebook page.

Because of the current capacity restrictions, Game Over Videogames has decided to not host video game tournaments or any other events in its store in the immediate future, Rider said.

“There is nothing to replace the side-by-side split screen experience. We’re anxious to start our tournaments again,” Rider said.

Some local gaming stores have tried to adapt to the current environment by hosting its community of hobbyists online.

Dragon’s Lair, which has a handful of large tables arranged expressly for in-store events, has no plans to resume gaming inside the store under current conditions, Siegel said.

“Right now it's certainly out of the question, and it is very painful. A very large part of our floorspace is dedicated to gaming. As of now, we don’t have any plans or time frame for when we might be able to run events again, simply because that’s a whole other scale for that many people,” Siegel told Community Impact Newspaper.

During the coronavirus pandemic, however, the retailer has been participating in Magic: The Gathering tournaments hosted online, setting up online chat services for its customers to continue playing together.

“We were able to facilitate a digital space through Discord for our customers,” Siegel said.

“Unfortunately, during this time we feel that it is best that we don't resume our gaming just quite yet,” White said. 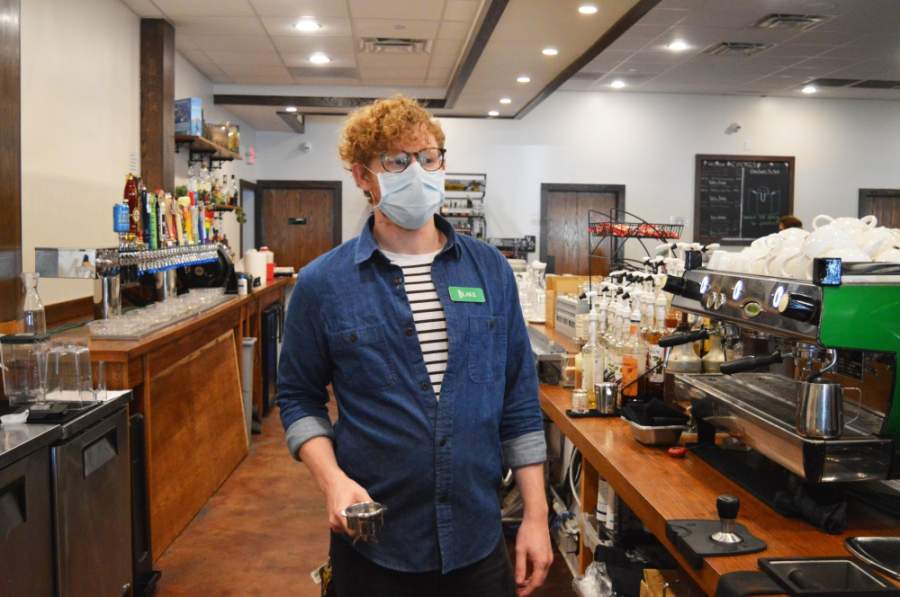 In a move to get the board game community back into its space, Emerald Tavern announced a four-phase strategy it believes will safely allow the community to return and play together.

The second phase of Emerald Tavern’s plan, which Weidner said may come in early May, permits customers to play board games inside the store. The cafe and board game store additionally has private booths and private rooms that can be reserved online by customers.

“I am anticipating customers and guests coming back out for that,” Weidner said. “We have already fielded dozens of phone calls [from customers] asking when they can come in.”

In accordance with state mandates set forth by Abbott’s executive order, no more than six customers can sit at one table, and Weidner positioned Emerald Tavern’s tables to be at least 6 feet apart from one another. Weidner said these distancing guidelines effectively cut down the actual allowable headcount of customers in the store to lower than 25% of its capacity.

The North Austin gaming store has stacked dozens of unusable tables and chairs in a side room ahead of this move. Until capacity restrictions are loosened—which Abbott said may happen as early as May 18—a large chunk of Emerald Tavern’s tables will remain hidden behind a white curtain.

“Events are definitely a big part of what our business model is. That is one of the fun factors that brings people out of the home, out of computer gaming and into analog gaming. It’s not just the face-to-face social interaction—it’s new and interesting experiences,” Weidner said.

“Consumer confidence and comfort level are what we're really listening to right now. So I have no doubt that if there are people who are comfortable coming out and taking some calculated risks, then we will see them.”