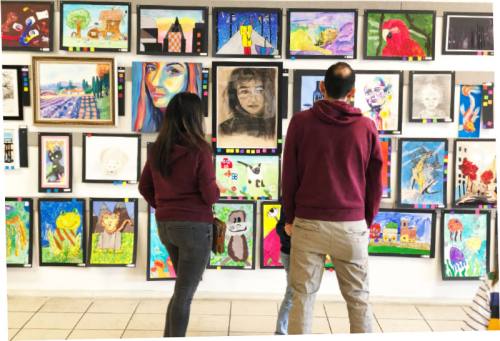 When a fellow parent at her child’s school asked Araoz, a painter, if she offered lessons 10 years ago, she set up shop for her first few clients. According to Araoz, the first location of Art + Academy was so small that her students’ easels touched the ceiling.

Today, Art + Academy has 15 teachers across four locations, in Cedar Park, Southwest Austin and Northwest Austin, where a location opened in 2009, as well as a new facility in Lakeway that opened Sept. 3 of this year.

One thing has not changed: Art + Academy is still focused on the core artistic skills of painting and drawing, skills that Araoz said she believes everyone should have. In the decade she has been an art teacher, Araoz has operated with a central belief: She can teach anyone to draw.

“There’s no magic gene,” she said, “It’s something you can learn.”

No matter the skill level of a student when he or she starts classes at Art + Academy, Araoz said she and her staff hone in on technique and progress, with a goal of giving students measurable results. The business’s website displays before-and-after examples of self portraits sketched on day one compared to now.

Araoz said she showcases these before-and-after snapshots to highlight her goal to inspire confidence and a sense of “self-achievement.”

“When you see that in the eyes of a little guy, a little kid, it just makes your day,” she said.

All students, old and young, can participate in gallery showcases at

Art + Academy facilities each semester, putting their creations on display. Each student drops notes on fellow students’ work, giving compliments to the artist, some of whom entered classes with only “stick-figure” drawing skills, according to Araoz.

“We see the transformation, and it’s priceless,” she said.