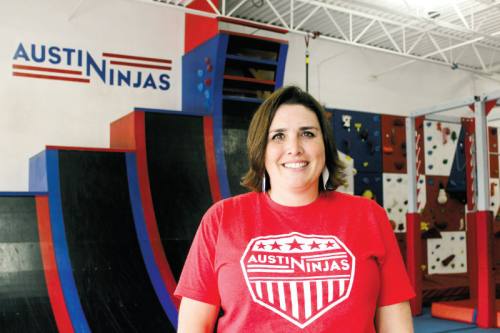 Jennifer Halla opened Austin Ninjas in January 2018 as a way for children to experience obstacles featured on the TV show u201cAmerican Ninja Warrior.u201d

Marie Young runs up a curved 14-foot-tall structure, scaling it with ease, before tapping the top of a wall.

The 14-year-old repeats the feat several times, seemingly without effort, but it is a skill she said took her six months to achieve at Austin Ninjas, an obstacle course gym geared toward children and based on the TV show “American Ninja Warrior.”

“I would just practice it over and over,” she said, adding she joined her school’s track team to help build strength and endurance.

It is achievements such as Marie’s that make owner Jennifer Halla glad she opened Austin Ninjas. Halla got the idea after visiting Chicago with her two sons, and they found a ninja gym. Noting that Austin did not have a ninja gym for children, she decided to open Austin Ninjas in January 2018.

“It has been above my expectations,” said Halla, a resident of Canyon Creek. “People have received it so well, which has been phenomenal. It’s amazing to see kids out there and adults having fun, … getting to see kids in competition [and] the small successes that kids have here and seeing that smile on their face.”

The Texas Ninja League, which Halla started, will have its first competition in Frisco in May.

“It’s amazing giving kids an opportunity to compete in something,” she said. “… It’s cool to see [in] the community how supportive everyone is of each other.”

Besides competitions, Austin Ninjas also has open gym for anyone to come and play on the obstacles as well as classes and camps. Classes not only help children improve their grip strength, balance and core strength but also improve their overall athletic skill, Halla said.

“Somehow the sport makes it OK to fail and keep trying,” she said.