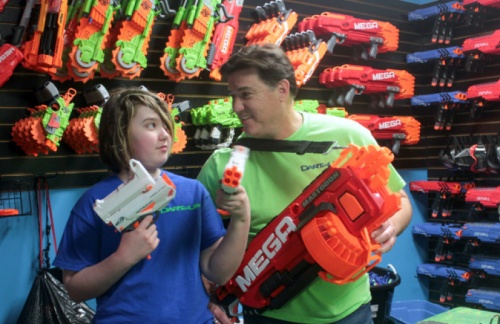 Richard McVay decided to take a leap of faith and open his own business after his previous firm was bought by a nationwide telecommunications company.

He and his 14-year-old son, Sean, both love to play with Nerf foam dart guns and wanted a larger place to play. Sean had also played an indoor arena in Colorado, so McVay said he decided to leap into running a business.

Dart’em Up opened in December 2016 off of US 183 and Lake Creek Parkway and features a 12,500-square-foot indoor family entertainment center with dart arenas, an arcade and party rooms.

“Everyone turns into a big kid,” McVay said. “Nerf has been around for 50 years, so everybody has Nerf Blasters at home and gets tired of shooting them in the yard or the house so this is a place where they can bring their own Blaster and use our darts.”

For $9-$12 per hour, children of all ages can play five different types of match games, such as Capture the Flag and Freeze-Tag. Players can pay by the hour, and McVay said players usually play about 10 games per hour.

Besides parties, Dart’em Up can also host team-building events. On Fridays and Saturdays from 8-11 p.m., the business turns on black lights, lasers and fog machines to create an ambiance for teens and adults to play.

When players first enter Dart’em Up, McVay said they head to the Briefing Room for a safety briefing, and then they get to choose their dart weapon of choice, don a pair of safety goggles and a fluorescent vest.

“I have the house rules where it’s not aggressive play: no hitting, no pushing, no shoving, no jumping off the walls like parkour,” he said. “It’s just old-fashioned fun. [Players are] separated into teams, so it’s all about team play.”

Before opening Dart’em Up, McVay said he knew he wanted to give back to the community. Sean wanted to help homeless children, so for every 10 birthday parties Dart’em Up hosts, it throws one party for free for homeless and underprivileged children. McVay said he coordinates with the Texas Baptist Children’s Home, CASA of Williamson County and Mission Possible to find children who may have never had a birthday party before.