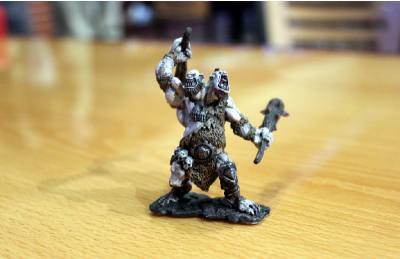 Nerdstock will start offering its Paint and Take miniatures painting class once a month starting in January.

Three gamers from Michigan—seeking warmer weather and a change in careers—turned their gaming hobby into a successful business with the opening of Nerdstock Gaming Center on Parmer Lane.

“We’re lifelong gamers, and we built a store we want to play at,” said Manager Michael Bell, who organizes tournaments at Nerdstock.

Bell, game master and Manager John Wyatt and owner Todd Gillissie opened Nerdstock in July 2016. Unlike most area game stores that offer 50 to 75 percent retail space and reserve the rest for gaming space, the founders of Nerdstock decided to focus more on game play, Bell said.

“It’s no surprise in Austin that every place you go to is usually packed to the gills,” Wyatt said. “We figured if we had more space, we could always be the more optimal location.”

Nerdstock does have about 1,000 different games for sale with options for tabletop, role-playing, dice and card games. Games for sale include expansions and accessories, such as for the popular card game Munchkin from Austin-based Steve Jackson Games.

Because most of the nearly 4,000-square-foot store is dedicated to gaming space, the trio also wanted to create a gaming center that was inviting to everyone and a home away from home, Bell said.

To ensure patrons playing games at Nerdstock for hours also contribute to the business’s bottom line, organized play and tournaments cost $5 for entry that goes toward store credit for the purchase of games and accessories. However, customers may also visit the store to try out or play games for free.

Because the business hosts weekly tournaments and gamer groups to play Magic: The Gathering or Setters of Catan, that has led to plenty of regulars.

“It’s almost a ‘Cheers’ environment where everybody knows your name,” Wyatt said. “It’s like Austin’s best-kept secret, a small club where we know each other.”