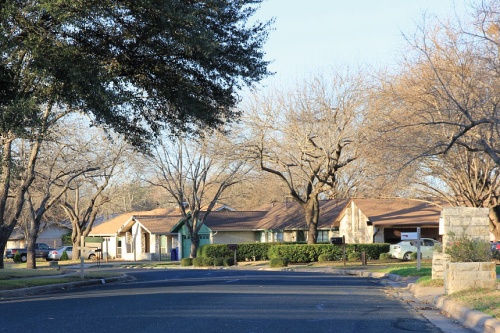 The city of Austin annexed the Anderson Mill Limited District in December 2008.

As of December, Austin no longer has the same authority it once did in managing and directing the growth of its borders because of a new annexation law that shifts power to property owners outside the city.

Under the new law—effective Dec. 1—cities with larger populations, such as Austin, that want to widen their jurisdiction must gain consent from a majority of the desired properties’ landowners through petition, or in some cases, an election.

This changes the prospects for two north-of-Austin areas—the Rattan Creek neighborhood and the Wells Branch Municipal Utility District—in which residents will have the power to approve a potential annexation rather than being forced to accept one.

“We’re happy about it; the district worked very hard to get this legislation passed,” Wells Branch MUD Manager Shirley Ross said. “One day, annexation is likely coming. What this means now is that residents here will get to have a say, and the city will have to make their case as to why it’s beneficial to be annexed.”

Previously, Texas cities could annually absorb any land within their extraterritorial jurisdiction—land within 5 miles of its proper borders—as long as it did not belong to another municipality and did not exceed 10 percent of the city’s existing land area. The city would create a plan for providing services, and city council would approve the annexation.

For decades cities relied on the former annexation law to widen borders, increase the tax base and manage growth. Since 1951, Austin has expanded its borders and suburban tax base through the execution of 1,489 annexations, according to city documents.

Under the new annexation law, if Austin wants to annex an area with fewer than 200 residents, the city must have  approval of a majority of the area’s property owners through an official petition.

However, if Austin wants to annex an area with more than 200 residents, such as Rattan Creek or Wells Branch—a majority of residents must consent through an official election.

Virginia Collier, principal planner for Austin, said before the new law, the city’s planning team would seek out areas in which an annexation would provide mutual benefits. She said typically these are areas where new development is occurring. In turn for providing city services, such as water and wastewater connection and public safety, Austin could expand its tax base and manage development to match its vision.

“Instead of a process we’ve followed for years, bringing forward areas annually and recommendations [for growth], we’re going to look more toward property owners that are coming in and asking for annexations,” Collier said. “It will be [property-owner] driven.”

Bennett Sandlin, executive director of the Texas Municipal League, a group that advocated against the new annexation law, said the former annexation regime was crucial for Texas cities, which are some of the country’s fastest-growing. Sandlin said the new law marks the end of “logical” growth.

“[Growth] is going to depend more on the luck of the draw with each individual [landowner],” he said. “It will slow the footprint of growth, and from that point on we’ll see what happens in the economy.”

Sandlin said a city’s suburbs create a stronger tax base, which is crucial in attracting industry.

However, District 6 Council Member Jimmy Flannigan said for Austin the added tax base is not worth the cost of annexation on the city. District 6, parts of which extend north into Williamson County, became Austin proper through 30 years’ worth of annexations.

“It’s expensive to support an area with public safety and infrastructure … more costly than the taxes will ever collect,” Flannigan said. “We’ve sprawled our way into a fiscal challenge.”

John-Michael Cortez, a senior policy adviser for Austin Mayor Steve Adler, said annexations allow growth to pay for itself and planning for “wise and sustainable growth.”

“When you have land that isn’t in the city’s jurisdiction … there is no zoning,” Cortez said. “You could have a residential property and some pricey incompatible commercial use next door.”


Life on the outskirts

Although the new law was effective Dec. 1, Austin will be able to annex two areas without consent of the landowners, including the River Place MUD by the end of 2017, through a strategic partnership agreement.

These agreements—no longer possible under the new law without a vote from property owners—are initiated early on between the city and a developer to bring a development on the outskirts into Austin when the city is able to provide adequate services.

In 2008 Austin annexed the Anderson Mill Limited District in Northwest Austin under a strategic partnership agreement in which residents had no say in the process. Residents were able to negotiate creating limited district—a quasi-governmental entity that collects extra taxes from property owners to provide services, such as to maintain parks.

District General Manager Mark Maxwell said the district has been successful in its mission but provided mixed reviews on annexation. As Austinites, taxes and fire and EMS service increased, but police presence decreased.

“I think we would have voted against being annexed,” Maxwell said.