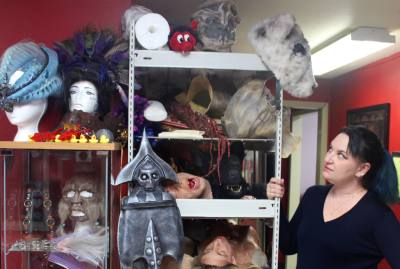 Most days of the week Meredith Johns can be found applying special-effects makeup to Austin actors with her crew from Northwest Austin-based makeup studio Hawgfly Productions.

When large-scale productions, such as AMC’s Western television show “The Son” film in town, Johns said she often finds herself in unique situations.

“If you would have told me 15 years ago that I’d be scalping people at The Driskill Hotel with Pierce Brosnan, I would have laughed at you,” Johns said.

Johns is one of many film, commercial and gaming professionals who either live or work in Northwest Austin, contributing to a growing creative scene.

The Texas Film Commission estimates there are 700 registered members of International Alliance of Theatrical Stage Employees in the Greater Austin area and an additional 1,150 non-union crew members working locally.

“I would go to these events in East Austin, and I would meet a lot of people who would say they were living in North Austin, too, because East Austin’s so expensive,” Wallace said, “There’s a lot of people there, and as prices go up, people keep edging up farther north.”

Recently the Northwest Austin area has stood out in the film scene because of an influx of independent film festivals at area theaters. Alka Bhanot and Tripti Bhatnagar, founders of the IndieMeme Film Festival screened at the Regal Arbor 8 @ Great Hills cinema, said they were able to gauge interest in their idea for a South Asian film festival by hosting screenings in the Austin area and leveraging the South Asian community in Northwest Austin. After hosting screenings for two years, Bhanot said she was nervous to put on a full festival in 2016.

Rattan Creek-based filmmakers and owners of X-Horn Productions, David and Lisa Reyes won an award at another Austin film festival for a movie they shot in Northwest Austin.

“The best networking that we found for somebody at our level is when you go to local festivals here in Austin. You meet people there, and that’s where you network,” Reyes said.

Film students at Austin Community College’s Northridge Campus can showcase their work at the South by Southwest Film Festival and the Austin Film Festival, said Christian Raymond, Radio Television and Film program professor and director at ACC Northridge. Some of ACC Northridge’s students have gone on to careers in Hollywood, while others stay local, Raymond said.

From ACC’s animation department graduates have gone on to work at North Austin-based Powerhouse Animations, which focuses on video game design and television, film and commercial production.

“I always wanted to find a way to bring animation into Austin because there’s so many super talented people,” Powerhouse Animations co-founder Brad Graeber, said. “There’s a bunch of good schools that are trying to teach animation, and there’s this creative drive in the city that you can tap into.”

In 2010, film projects added $188 million in economic activity to the city of Austin and just over $1 million in tax revenue, according to economic analysis firm TXP Inc.

In the 2010-11 biennium, the Texas Moving Image Industry Incentive Program, which provides grants for projects produced in Texas, had a budget of $62 million. However, the program’s 2016-17 budget is set at $32 million. Area film industry professionals have expressed concern about the decrease in funding.

“We’ve worked 40 commercials out of this office this year, and most of them, we’ll try to have the same crew,” Hoppock said. “They’re all local people; they don’t come in from elsewhere.”


Other states a threat to business

“The union roster is getting shorter and shorter because there hasn’t been much work. Some people haven’t worked for months,” Johns said.

Decreases in funding toward the incentive program from the Texas Legislature coupled with increased competition from state incentive plans in states such as Georgia and New Mexico has led to many industry professionals moving out of state to follow projects or seeing opportunities begin to decrease when staying in Austin.

“We’ve lost a lot of really good crew to Georgia,” Johns said. “We have two TV shows going [in Austin] right now, and we’re actually having to share crew.”

Through the city’s Creative Content Incentive Program, Austin can provide up to 0.75 percent in reimbursements to television and film productions to go toward paying wages of local workers and for promoting the city of Austin.

These incentives are not necessarily enough to attract large-scale productions, especially when the state incentives cannot compete with other incentive programs in the U.S., said David Colligan, manager of the Austin Economic Development Department’s Global Business Expansion Division.

“The local areas are only as competitive as the state, and we’re at a competitive disadvantage if we can’t secure larger productions,” Colligan said.