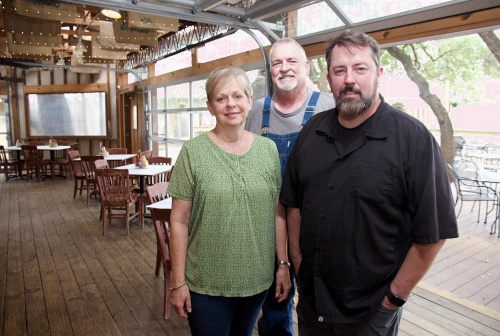 At Dahlia Cafe in Liberty Hill, owners Debi and John Johnston operate with the motto: “Thanks for letting our family serve your family.”

Debi said she has attended important personal life events of several of her customers, including weddings and funerals. Several of the cafe’s employees have met future spouses at work, and some have even held their weddings at the restaurant, she said.

Debi and John opened Dahlia Cafe in 2007. They have since run the comfort food restaurant with help from about a dozen of their family members, including their son Brian Johnston, who serves as general manager.

Prior to launching their restaurant, the couple worked as real estate appraisers. Debi said she wanted to find work that would involve less travel. A cafe fit the bill.

Dahlia Cafe’s menu is built on family recipes, John said, including buttermilk pies and a meatloaf recipe that has been passed down through multiple generations of home cooks.

The cafe attracts a steady stream of newcomers as well as a number of regular customers, some who come several times per week, Debi said.

Some customers travel from Georgetown, including residents from Sun City, John said.

Along with an indoor dining room, Dahlia Cafe has a large outdoor seating area with space for live music, which happens every Friday and Saturday evening, and a playground for children.

The cafe recently introduced a new menu for the first time in 11 years. The Johnstons are also planning renovations and expansions of the restaurant, which operates out of a 1930s-era farmhouse. Expansion plans over the next year include building new bathrooms and adding space in the kitchen and food storage areas.

John said maintaining a close-knit, small-town feel is an important component to the cafe’s aesthetic.

“The feeling of family translates down from our employees to our customers,” he said.
SHARE THIS STORY