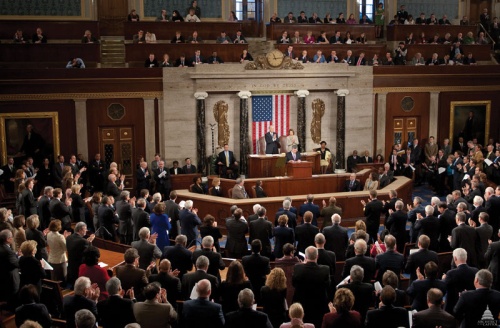 As recently as 1990, one member of the U.S. House represented all of Travis County. Today the county is divided into five U.S. House districts. The city of Austin, which extends into Hays and Williamson counties, comprises a sixth district.

Without a devoted representative, the city and county’s interests may be eclipsed by those of residents hundreds of miles away, which are often quite different.

Two-thirds of Travis County voters were  Democrats in the 2016 presidential election, for example. But only one of the county’s five representatives, Lloyd Doggett of District 35, is a Democrat. The other four—Michael McCaul, District 10; Bill Flores, District 17; Lamar Smith, District 21; and Roger Williams, District 25—are Republicans.

Doggett represents less than a quarter of Austin residents—187,033 people—but his district contains the second-largest portion of the city, according to a 2012  Texas Legislative Council analysis.

“Austin and Travis County were cut up like a pizza with a jagged knife,” Doggett said of the districts today.

It was created after the 2010 census, when Texas gained four seats in the U.S. House due to population growth.

In Texas the state Legislature draws the district maps for the U.S. House as well as for the state House and Senate.

A federal court found that the maps drawn by the Legislature in 2011, which included U.S. House District 35, intentionally discriminated against minority voters and ordered interim maps be used until new, fairer maps could be drawn.

In August the federal court ruled the interim maps maintained the racial gerrymandering of the previous maps and ordered the Legislature to redraw two U.S. House districts, including Doggett’s, so as not to violate voters’ rights.

The three-judge panel ruled District 35 was drawn to maximize the number of Hispanic or Latino voters in order to minimize their influence in surrounding districts, a form of minority voter dilution called packing.

In response to this ruling, Texas Attorney General Ken Paxton released a statement: “We look forward to asking the Supreme Court to decide whether Texans had discriminatory intent when relying on the [federal] court.”

The state appealed, arguing it should not be penalized for maps drawn by a federal court. The U.S. Supreme Court accept-
ed the case and will rule by summer.

The justices will determine if Central Austinites’ rights have been violated by these maps and how residents will be represented in years to come.

“Austin is one of the most, if not the most, politically gerrymandered cities in the country,” said Lisa Goodgame, board president of progressive activist group Indivisible Austin.

Gerrymandered districts do not fairly represent their constituents, according to Michael Li, senior counsel for the Democracy Program at New York University Law School’s Brennan Center for Justice.

“For centuries now, one of the benefits of winning elections in census years is that you then have more say in how districts are drawn ... until the next census,” Texas GOP Chairman James Dickey said.

Recently, however, Americans across party lines have agreed that partisan gerrymandering is problematic.

A 2017 poll commissioned by the Campaign Legal Center and conducted by a bipartisan team of pollsters found that 71 percent of Americans favor the “Supreme Court setting new, clear rules for determining when partisan gerrymandering violates the Constitution.”

There is no precedent outlawing this practice, as is the case with racial gerrymandering.

“Everyone actually agrees that partisan gerrymandering is constitutionally problematic,” University of Texas School of Law professor Joseph Fishkin said. “But the dispute has been whether courts do anything about it—or should treat it as an issue.”

“While big data,” which allows legislators to know everything from a person’s Google searches to the strength of her political ideology, “can be a really important tool, in a state like Texas you can use a much simpler tool like race,” Li said.

If the U.S. Supreme Court upholds the lower court’s ruling, the Texas Legislature will have to redraw the U.S. House district maps.

This likely will not happen before the November 2018 elections, so new maps would not take effect until 2020, at which point the census will be underway.

State Rep. Eddie Rodriguez, D-Austin, whose district runs from Rainey Street through southeast Travis County, serves on the Legislature’s Redistricting Committee, which has not met since 2013.

“Essentially, we’ve gone through an entire decade with unconstitutional maps that are intentionally discriminatory—to use the words of a federal court—and there’ve been no repercussions for the Republicans that drew them, and there’s been no relief for the minorities that have had to live under these maps,” he said.

State Rep. Cindy Burkett, R-Sunnyvale, is chair of the committee. Her office did not respond to requests for comment.

Alternately, the Supreme Court could overturn the lower court’s ruling and allow the 2013 maps to stand until the Legislature redistricts in 2021.

“Judicial overreach is always a problem,” Dickey said. “[Redistricting] is an inherently political process, and it makes sense that the people’s elected representatives control that as a political process.”

In 2013 the city of Austin commissioned, with voter approval, an independent group of residents to redraw the city’s districts.

“They did an enormously fair, thoughtful job of seeing to it we have good districts,” said Peck Young, director of Austin Community College’s Center for Public Policy and Political Studies. Young served as a consultant for the commission.

Due to this redistricting process, the council went from an at-large system that over-represented neighborhoods with higher voter turnout, “like richer, whiter areas,” Young said, to more fairly representing all residents.

“It’s a process that should be done all over the country,” Young said.

Such change is unlikely at the state level, however, because shifting control of the redistricting process requires a constitutional amendment, which requires majority approval from both the Texas House and Senate.

“It can be hard for politicians to give up that power,” Li said.

Doggett thinks it is unlikely the Texas Legislature will make this change.

Yet no more than a quarter of the city is contained within one district.

Flores’, whose district changed significantly when the 2013 maps were implemented, said redistricting  is “really just part of the process of being a representative.”

Though his constituents changed, Flores feels they remain fairly represented­­. “They feel like they have two members of Congress” because he remains accessible to them, he said.

Community Impact Newspaperreached out to all five U.S. House representatives in Travis County.

For Doggett, however, redistricting makes his job harder.

“When people ask me where I live, I usually say I-35, and that’s what it feels like ... because in an effort to provide accessible service to a district that was drawn to minimize accessibility and to create as many obstacles to it as possible, I try to get on most of my trips home to both San Antonio and Austin and spots in between in order to hear from people and to meet their needs,” Doggett said.

When District 35 was created in 2011, Doggett ran for re-election in an entirely new district. When the district is redrawn, whether by Supreme Court mandate or because of the next census, he will have to adapt again.

And he’s not the only one.

“What we would prefer is to stop the guesswork,” Travis County GOP spokesperson Andy Hogue said. “We never know when the hammer is going to come down from a federal judge.”

Or, in this case, from the Supreme Court.

Because of its unprecedented nature, Li said, “it’s hard to say how the court will rule.”