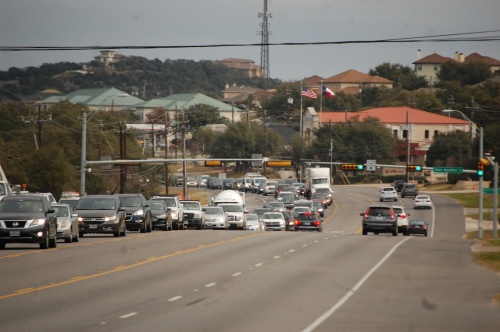 Lakeway City Council approved a resolution to support improvements proposed by the Texas Department of Transportation to improve traffic flow on RR 620. The Texas Department of Transportation proposed an elevated roadway above RR 620 from RR 2222 to US 183 as a possible long-term solution to the area's congestion.[/caption]

Travelers along RR 620—from US 183 to Hwy. 71—may one day get a break from the traffic plaguing Travis County’s western corridor.

The Texas Department of Transportation is proposing various long-term and mid-term improvements on an 18.8-mile stretch of the roadway:

Bruce Byron, TxDOT Austin District project manager for the 360/620 Corridor Improvement Studies, presented the proposed improvements along with a summary of the RR 620 Feasibility Study preliminary results to Lakeway City Council on Jan. 19.

“The bottom line is you have probably twice the traffic on the [RR 620] roadway that it was designed to handle,” he said.

Out of the approximately 3,000 responses to the RR 620 study survey the agency has received to date, about 19 percent of respondents said they have been in a crash on RR 620, Byron said.

The portion of the proposed improvements in Lakeway and Bee Cave—from the Colorado River Bridge to Hwy. 71—is estimated to cost $73 million without including any right-of-way purchases or drainage improvements in the area, he said.

Although no funding has been slated for the proposal, Byron said Lakeway and Bee Cave’s financial contributions to the project may help accelerate the next phase of the improvements, including an environmental study.

Council members unanimously approved a resolution supporting TxDOT’s design and construction plans for the RR 620 improvements in Lakeway and Bee Cave. Mayor Joe Bain said the city’s contribution to the project may need to result in a bond election.
SHARE THIS STORY