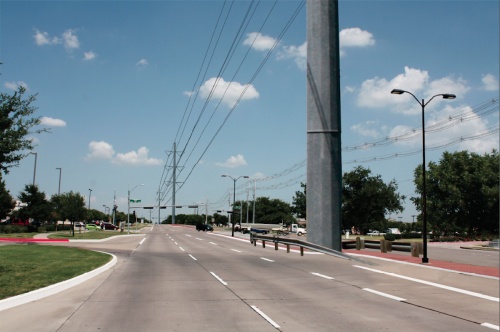 This rendering shows what the power lines would look like with Main Street widened.

A hearing to consider the proposed power lines in West Frisco has been moved from Dec. 17 to Feb. 11.

The Public Utility Commission of Texas will consider the proposed power lines during its February open meeting. The commission was originally scheduled to make a decision on the power lines route by Jan. 15.

Sen. Jane Nelson, R-Flower Mound, sent a letter to the PUCT saying many of her constituents would have difficulty attending the Dec. 17 meeting because of the holidays. The Commission rescheduled the hearing in response to Nelson's letter.

Many Frisco residents and officials have opposed the proposed power lines in West Frisco, which has proposed routes along Main Street and Stonebrook Parkway.

Those opposed to the lines have lobbied to have them buried, noting the lines would reduce property values and hinder the city of Frisco from widening Main Street in the future. However, the cost to bury the lines is about $28 million more than building overhead lines.

Two administrative law judges submitted a recommendation to the PUCT last month saying the power lines should be built above ground, citing the cost differences.