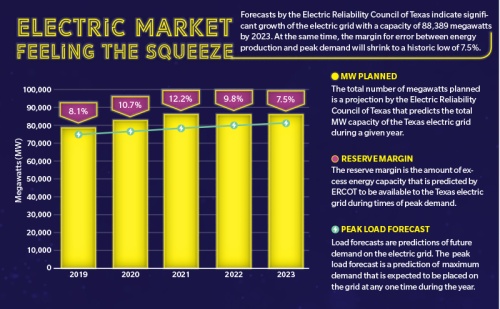 Forecasts by the Electric Reliability Council of Texas indicate significant growth of the electric grid with a capacity of 88,389 megawatts by 2023. At the same time, the margin for error between energy production and peak demand will shrink to a historic low of 7.5%.

At a briefing in early July, local electric provider New Braunfels Utilities and officials from the Electric Reliability Council of Texas discussed the current status of the ERCOT region of the Texas electric market, which covers 90% of the population of the state of Texas.

Looking at ERCOT’s annual Seasonal Assessment of Resource Adequacy report, officials anticipate record-breaking demand this summer at a time when the market’s reserve capacity is historically low. Should market reserves drop below ERCOT’s predetermined reserve capacity, Energy Emergency Alert protocols will potentially take effect, which could lead to rotating outages across the state.

“Built into that forecast is how much wind [power will be generated], generation from solar, and there’s a lot of scenarios assumed and assumptions made,” NBU CEO Ian Taylor said. “While there’s a reserve margin, it’s like any kind of planning effort, and the reserve margin continues to shrink year after year.”

Estimated to be 13.5% in May, the reserve margin, or the amount of excess energy capacity predicted to be available to the electric grid during times of peak demand, was down to 8.6% in late July, NBU officials said.

This has drawn attention from the state Legislature and Public Utilities Commission of Texas, both of which help to supplement ERCOT in its role to maintain stability of the electric grid.

“While we are certainly concerned about a lowest-ever reserve margin, we believe that ERCOT has the resources necessary to maintain the reliability of the grid thanks to the close attention the Legislature has paid to the challenges of maintaining our state’s competitive electricity market,” PUCT Director of External Affairs Andrew Barlow said.

Tasked with balancing the generation and load on the electric system at all times, ERCOT has access to multiple emergency levers if operating reserves drop below the 3,000 MWh threshold and are not expected to recover within 30 minutes.

Along with issuing various EEAs, ERCOT has the capability to incentivize the Texas electric market by either lowering or raising the price of electricity in order to maintain grid stability.

In addition, ERCOT can implement various load shed requirements, or instructions on how much electricity needs to be redistributed, to transmission operators and utilities.

If the frequency of the electric grid falls below 60 hertz, ERCOT can also automatically drop large loads, or the biggest users of electricity, through a process known as under frequency relays.

Alluding to the expected reliability of the ERCOT market in the coming years, Sopko also pointed out the latest ERCOT Capacity and Demand Reserve report, which projected an increase in the overall threshold of the reserve margin in the coming years.

Based on the CDR report, ERCOT projections of the Texas electric market indicate a possible reserve margin of 12.2% for the year 2021; however, that margin is projected to drop to 7.5% by 2024 as the ERCOT region continues to experience an above-average growth in electric demand.

According to the CDR report, this is primarily due to oil and gas development in West Texas and the construction of new industrial facilities on the coast.

“When we look at a summer period, typically when something like this will happen will be between 4 p.m. and 5 p.m.,” NBU Power Supply Manager David Hubbard said. “People across the state are required to shed load in order to respond to these EEA levels.”

One of three electric providers for New Braunfels residents, NBU serves the majority of metered customers in the area at more than 40,000 while maintaining a distribution load that has enough capacity to serve 90,000 customers.

In an effort to respond to potential EEA requirements while reducing volatility for customers in both price and service, NBU has invested in its power supply program, which includes a shift to 27.5% energy from solar power by 2021.

“We are in a technology shift,” Hubbard said at the July briefing. “Solar is a small percentage of the makeup, and that’s going to shift over time. It’s the solar prices mixed with hedging prices, and it’s blending the price together to help maintain a low cost for our customers.”

Another area of interest for NBU is Demand Response Programs, which incentivize customers to think about how and when they use electricity.

Throughout the year, NBU has announced Energy Action Days, part of a voluntary Demand Response  Program that asks customers to turn up the thermostat, avoid using large appliances and other options during peak use times from 3-7 p.m. or when the most strain is on the electric grid.

According to NBU, Energy Action Days are designed to help reduce overall power costs, reduce strain on the electric grid and reduce each customer’s energy footprint.

Additional energy-saving tips at home include shutting the blinds or shades during summer months, ensuring that all doors and windows are sealed properly –light shining through a crack indicates air penetration; and turning off all lights, computers and other electronic devices whenever possible.

“Demand response is one of the next areas NBU is going into to look at shaving load during those critical peak times,” Hubbard said.

While pursuing an ongoing information campaign to help educate customers, NBU and other local electric providers, such as Guadalupe Valley Electric Cooperative and Pedernales Electric Cooperative, must have an active load-shed plan in place in case ERCOT enters EEA protocol and begins to issue load-shed requirements to transmission operators and utilities.

“The Lower Colorado River Authority is PEC’s designated transmission operator,” said Mike Viesca, PEC’s executive vice president of public affairs in reference to PEC’s plan of action for an ERCOT EEA event. “They are the entity that would receive word from ERCOT and would notify PEC. If we were instructed to begin rotating outages, we would communicate to our membership through our PEC homepage at www.pec.coop, our social media channels, and there would be a recorded message on our PEC phone system. Once the instruction was given to resume normal operations, all of those communication platforms would be updated accordingly.”

A process by which various circuits are taken out of power to reduce strain on the electric grid, load shedding would be required by local utilities for as long as needed by ERCOT during an EEA Level 3 event, which begins when the grid’s energy reserves drop below 1,000 MWh, according to Tammy Thompson, GVEC’s executive manager of business and brand development.

In a situation where ERCOT requires load shedding, GVEC would take chosen circuits out of power for 20-minute intervals.

The largest number of New Braunfels customers supported by a GVEC-operated circuit is just under 1,500.

“Due to this process, there is no way to predict how many customers would be affected in a certain area, nor when,” Thompson said. “However, since rotating outages include all Texas utilities, all New Braunfels customers would likely be affected at some point regardless of the utility that serves them.”

For the largest electric provider in the city of New Braunfels, NBU maintains a load-shed requirement of 4.1 MW per 1,000  MW and has a maximum number of 1,800 customers per circuit.

During an EEA Level 3 event, NBU officials anticipate rotating outages of 15 minutes per circuit until ERCOT determines emergency action is no longer necessary.

The last outage event to occur in the city of New Braunfels happened in 2011, when frigid winter temperatures created a spike in energy demand by local customers and resulted in a 7.5-hour blackout.

Officials have cautioned that a similar severe weather event, such as heat wave, could trigger another spike in energy demand this summer.

“It really is a matter of public policy,” Taylor said. “If ERCOT wanted to go in and make adjustments to the market, they could get that reserve margin back to where their target is, but by doing that you interfere with the competitiveness of the market. So, our public policy makers have that decision to make. Do they intervene through PUCT and ERCOT to make those modifications, or do they let it go the way it is right now?”
SHARE THIS STORY