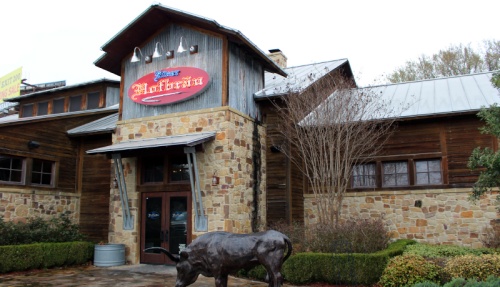 River Hofbrau offers a hunting lodge atmosphere with a patio that overlooks the Guadalupe River.

For the past four years, River Hofbrau & Beer Garden has been serving hot food and cold drinks at its riverfront location in New Braunfels.

Jarrod Loera, the new general manager, said the restaurant recently updated its menu to offer “a taste of German and a whole lot of Texas.”

Loera invites guests to stop in and enjoy his personal favorite entree, the golden-battered chicken-fried venison that is served with ranch mashed potatoes and honey chipotle grilled corn on the cob.

“The brisket grilled cheese is becoming a fast favorite,” he said. “It [comes with] a homemade tomato bacon jam.”

According to Loera, River Hofbrau & Beer Garden smokes its own meats, and all dishes are made from scratch with the exception of desserts. Sausage comes from the local Granzin’s Meat Market, and the restaurant’s No. 1 seller is its assortment of German-inspired schnitzels that come with smoked bacon cabbage and old world German potato salad.

Patrons at River Hofbrau & Beer Garden have the opportunity to dine in the restaurant’s hunting lodge atmosphere or on the outdoor patio that overlooks the Guadalupe River and features live music on Friday nights.

The bar features daily specials with 30 beers on tap and an assortment of wine and signature cocktails. There are 20 different flavors of Dos-a-Ritas to choose from, in which a bottled beer is served upside-down in a giant flavored margarita.

In addition to off-site catering services, River Hofbrau & Beer Garden can accommodate large groups in its banquet room, and Loera said the establishment will be updating its menu every few months to include seasonal offerings.