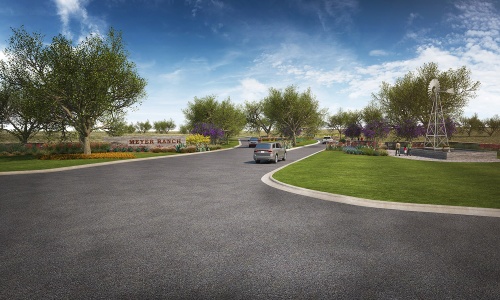 The entrance to Meyer Ranch is illustrated in this rendering.

﻿With projects in Georgetown, Liberty Hill and Round Rock, developers Todd McCullough and Randy Rollo of Randolph Todd Development said they had an interest in expanding to the south end of the Austin-San Antonio corridor.

Three years ago the Austin-based developers purchased property at Hwy. 46 and South Cranes Mill Road, nestled northwest of New Braunfels on the cusp of Canyon Lake.

The project, Meyer Ranch, takes its name from the previous landowner, and the developers say they intend to maintain the integrity of the land.

“We’re trying to maintain the legacy of the land; this land’s been basically in the same family for many years,” McCullough said. “... We want you to feel like you’re owning a piece of the ranch.”


Years in the making

The property falls about six miles outside the New Braunfels extraterritorial jurisdiction, or ETJ, which is roughly 10 miles from the city limits. Therefore, the Meyer Ranch developers are subject only to Comal County regulations.

“We really don’t have restrictions,” Rollo said. “The only thing we have to worry about is how we construct our roads and drainage.”

Randolph Todd applied for a wastewater permit from the Texas Commission on Environmental Quality that allows it to implement a wastewater treatment plant. As a result, Meyer Ranch gained status as a municipal utility district, or MUD, in 2017. A MUD—which functions as an independent, limited government—provides an alternate way to finance infrastructure by issuing bonds that fund necessities such as water, sewer, drainage and road facilities. Property tax revenue and user fees are used to repay the debt.

“Down [Hwy.] 46 there’s not a lot of density-type subdivisions,” McCullough said. “That’s why we took the time to get the permits and the entitlements necessary to have a subdivision with density product that more people can afford.”

Randolph Todd also conducted a traffic impact analysis to plan for the increased motorists the development will bring.

“We’ve had to make highway changes down [Hwy.] 46 to accommodate,” Rollo said.

Developers say the project will take a decade to reach full build-out and will carry a value of $672 million.

McCullough said a top deciding factor for purchasing the Meyer Ranch property was its location in Comal ISD.

“That’s something we look at when we’re looking at new locations, and this is a highly rated school district people are moving out towards,” McCullough said.

Steve Stanford, executive director of communications and governmental relations for CISD, said the district is preparing for growth across the district.

“Obviously that development with 1,600 homes, we could potentially see upwards of 900 students at build-out,” Stanford said.

The district projects an increase of approximately 5,600 students during the next five years, according to CISD’s fall demographic update. The report states that from September 2017 to August 2018, the district had more than 5,600 home sales, and roughly 26 percent were new homes. Comal ISD has 3,200 lots available to build on with more than 28,000 future lots planned. Of those, groundwork is underway on 2,290 lots.

When it comes to an influx in student population, Stanford said the district handles it in three ways: by adjusting attendance boundaries, adding portable buildings at existing campuses and building new schools.

According to Stanford, CISD’s reputation for providing quality education is becoming more known as the region expands.

“We continually get feedback that when [people] move to the Central Texas area that they’re looking at Comal [ISD] because of the educational experiences we’re providing here, and that’s getting out there amongst developers,” Stanford said. “Comal County is the second fastest-growing county in the U.S., so we like to think that besides just the location that it’s at and the aesthetics of the Hill Country that also the school district contributes to that as well.”

Those who visit Meyer Ranch can expect a contemporary Texas Hill Country look and feel.

“We don’t want Texas ‘hokey ranchy,’” McCullough said. “There are elements of ranch style and ranch living. We hope to have a little bit more of a modern touch to it.”

One of the most notable features of Meyer Ranch according to its developers, is the 45-100-foot lot sizes it will offer, which will enhance affordability in an area where 1-acre lots are a more common option.

During the planning phases Rollo and McCullough said they placed an emphasis on environmental integrity.

“Instead of drilling into wells and the aquifer, we’re getting our water from Canyon Lake water supply, so we’re environmentally sensitive developers,” Rollo said.

With its wastewater plant Meyer Ranch will treat its own effluent, or liquid waste and sewage, which will be used for irrigation.

The development will also feature more than 200 acres of open greenbelt space, including hiking trails, parks and sports fields. Construction is being planned around the creeks system with tree preservation in mind, McCullough said.

“We put our streets around trees to protect the large oak trees,” McCullough said. “... We literally moved the road around where we were building just to make sure one of the trees was saved.”

Low-level streetlights will be used in Meyer Ranch to help preserve the dark skies.

“We want the affordability, and we want you to be able to see the stars still,” Rollo said.

In addition Rollo said he hopes residents of Meyer Ranch will be inspired to get back to the simple life. He said he envisions families putting their computers and phones away to enjoy a safe community.

“We want families to spend time with each other and go outdoors and try to get away from work,” he said.

A community park is also planned that will include an open-air pavilion, a stage for concerts, space for food trucks and  a gathering place for events.

The developers said they hoped to have model home construction underway this year, but recent heavy rains forced a delay. Ground is expected to break on model homes in the first quarter of 2019 with products ready to purchase in the second quarter.

So far four builders have been selected, and prices will start in the mid-$200,000s. At full build-out the developers say Meyer Ranch will offer products for diverse styles, age groups and price points.

“It’s an affordable house for school teachers, firemen, police ... those people who want to live in Comal County and go to these schools without having to buy a 1-acre lot,” Rollo said.

Rollo and McCullough have been in the real estate and homebuilding industry for the past 30 years, and the pair said more area projects could be on the horizon, including mixed-use “live, work, play” developments.