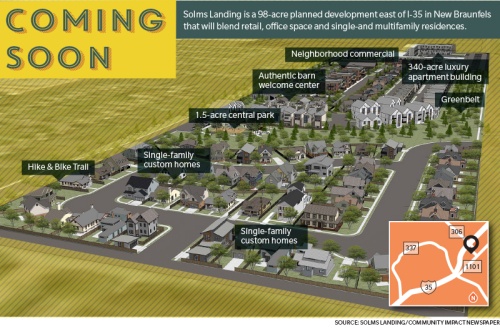 Sameu00a0Solms Landing is a 98-acre planned development east of I-35 in New Braunfels that will blend retail, office space and single-and multifamily residences.

Those who have visited the Pearl District in San Antonio or the Domain in Austin have gotten a taste of the mixed-use lifestyle a local developer aims to bring to New Braunfels.

Solms Landing is a 98-acre tract of land located on FM Road 306 between I-35 and FM 1101. The planned mixed-use development will offer the “best of” neighboring big cities in New Braunfels, according to Fred Meyers, vice president of project development for Solms Landing.

“We’re looking at taking shopping, living and dining to another level of experience,” Meyers said.

More specifically, James Mahan, who developed the concept for Solms Landing, said he has looked to suburban markets comparable to New Braunfels and taken the most inspiration from LaCenterra in Katy and the Avalon in Alpharetta, Georgia. He cites a key feature as the pedestrian access each development offers and envisions easy pedestrian access between the development and neighboring schools and businesses.

Mahan’s company, South Texas Capital Advisors, has been working with the city to finalize a development plan for the site, a process that is slated for completion in the next few months.

“I think our goals are very much aligned with the city’s goals,” Mahan said. “We want our project to be successful so that it’s an example for other projects in the city to follow that same plan.”

City council approve plats for Solms Landing, which will consist of 60 dense single-family residential lots. Multifamily units are also envisioned for the future of the site. Developers said they plan to break ground by late March.

Mahan said the time frame for complete build-out of the project is flexible, and his No. 1 priority is executing the proper vision of the project.

“Our initial goal was a five-to seven-year time frame,” Mahan said. “I’m cautiously optimistic that there will be a shorter four-to five-year time frame, but maybe even shorter than that. We’ll implement the strategy, and it will take as short or as long as the market says it will.”

Solms Landing, which Meyers said is quickly becoming a $250 million project, will provide a multigenerational “live, work and play” atmosphere. The development could add 510 rooftops, 1,400 jobs, two hotels and 295,000 square feet of retail space, which will have a substantial economic boost to the community.

Victor Garza, economic development manager for the city of New Braunfels, said mixed-use developments like Solms Landing maximize the use of a single parcel of property, which offers a higher economic return.

“The highest and best use is what we’re always trying to do,” Garza said. “There’s always going to be someone using that property.”

The city’s Economic Development Strategic Plan that was updated in 2017 identifies one of its top strategies over the next five years as incorporating 300,000 square feet of Class A office space, which is a goal Solms Landing may help to achieve with its proposed five- to six-story build-to-suit space with a parking garage. The economic benchmark report that was released by the New Braunfels Economic Development Corporation in 2017 showed that 68 percent of employed citizens who live in New Braunfels commute outside the city for work. Class A office space will help attract premiere tenants that offer higher-paying jobs, Mahan said.

According to Mahan, the development plans to include housing that falls below $400,000, including starter homes in the mid-to-high $200,000s.

Solms Landing will also bring economic benefits during the construction phase, providing an estimated 2,657 jobs that will total $133 million in wages.

Based on the most recent economic impact study for the project, the city would receive a projected $365,000 in construction sales tax revenue, and Comal County would receive $122,000.

The city and county would also collect recurring revenue from the development at complete build-out in the form of sales, hotel occupancy and property taxes.

The proximity of Solms Landing to Resolute Health Hospital at 555 Creekside Crossing has been identified as another
advantage the development will offer.

“Any time there is a hospital of their stature, they draw a lot of like-minded medical facilities,” Meyer said. “It could pave the way for more medical specialties.”

Mahan said his group has already been approached by an eye surgeon who is interested in the location.

“As New Braunfels continues to grow, we also see this an opportunity to explore additional specialties that might not currently be in the market at all or are only here on a part time basis,” said Tripp Lyles, director of strategy for Resolute Health Hospital. “Currently in this community, over 45 percent of the population travels to seek care in San Antonio or Austin. Our hope is that we can keep care local and continue to improve access to all health care needs here in New Braunfels.”


Blending into the community

Meyers said he sees Solms Landing as a unique patch of land that will connect Braunfels, Germany, with New Braunfels, Texas, USA.

An illuminated 30-foot globe is a statement art piece that could be incorporated into a roundabout within the property, which will be one of many large works of art in the development. Mahan and Meyers envision the murals and sculptures in Solms Landing to serve as “selfie destinations” like some of the social media-friendly spots that have caught on in Austin.

“Our goal is for (Solms Landing) to be a staple in the community,” Mahan said.

One way Solms Landing will help draw the community together is through the use of 10 acres of park space, including a 1.5-acre central park that would be positioned between four high-end restaurants. The park could serve as the future home of kite festivals and farmers markets, and a band shell and splash pad area are also part of the plan, Mahan said.

“We’re working with the (city) parks department where hopefully we can have some type of shared calendar,” Mahan said. “In the spring break and summer season, there are lots of events here but during the fall, winter and early spring months, it really dies down a lot. We think there’s a lot of opportunity to play on the seasons (while not taking) away from anything else that’s going on in the city. We don’t want to take away from Gruene or downtown. We want to complement.”

In addition, Meyers said $400,000 is budgeted for tall, mature trees that will be placed throughout the development.

Those who enter Solms Landing will be met by an authentic two-story barn that includes a silo for rain water collection that will be reused within the development, Meyers said.

Mahan said the development will incorporate detention/retention facilities with all drainage channels that will create wet ponds to enhance the landscape along walking and hike and bike trails.

“The thing’s going to be filled with character,” Meyers said.

In addition, two high-end hotels are in the works, one of which will be a boutique-style destination. The other will be geared toward business travelers, Mahan said.

Williams-Hirsch Custom Builders and Wes Peoples Homes are the first two confirmed homebuilders for Solms Landing, which have committed to 170 home sites. Meyers said the builders will bring craftsman-style modern farmhouses with large porches and metal roofs. In addition, contract negotiations are in the works for a 340-unit luxury apartment building.

Meyers and Mahan are striving to attract luxury retailers that will be viable and sustainable, they said. Business owners and investors will also have the opportunity to buy their own office or retail space in three planned two-story neighborhood commercial buildings that will offer 10,000 square feet per floor.

Thom’s Market, an Austin-based independent grocer, has confirmed its interest in putting a convenience store in Solms Landing, and Meyers said an aspect of that could include a golf-cart delivery service within the development.

Other possibilities for Solms Landing include a brewery, health club, public dog park, a natural foods grocer, an entertainment venue and a dedicated area for eight to 10 Airstream food court trailers.

“Our goal is to be a true work-live-play development with a strong focus on the work aspect of it that I think will allow us to differentiate between other mixed-use developments in the region,” Mahan said.