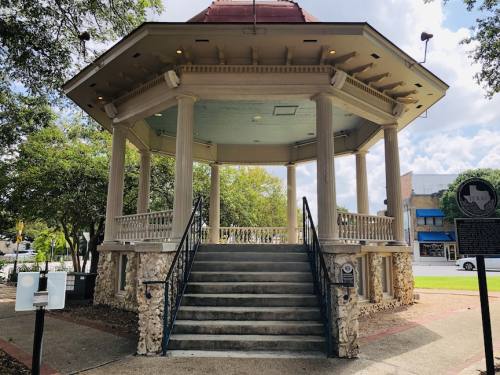 A New Braunfels Parks and Recreation project will repaint the bandstand over the next 3 weeks.

The city of New Braunfels announced last week that downtown’s Main Plaza bandstand will be repainted by the Parks and Recreation Department beginning Sept. 30.

The bandstand will be unavailable for public use during the estimated three-week project, according to the city. Officials anticipate the refurbishment to take place in time for downtown fall and winter festivities as well as New Braunfels’ 175-year anniversary celebration.

“The colors we will use will match the existing paint,” Parks and Recreation Director Stacey Dicke said. “The bandstand was historically restored in 2005, and we have used the designated color scheme ever since.”

The original Main Plaza bandstand was erected in 1905 and served as the stage for summer evening concerts held by the Waldschmidt Fire Department band. The pavilion was raised on a limestone base in 1926, and it remains a focal point of the downtown New Braunfels landscape.