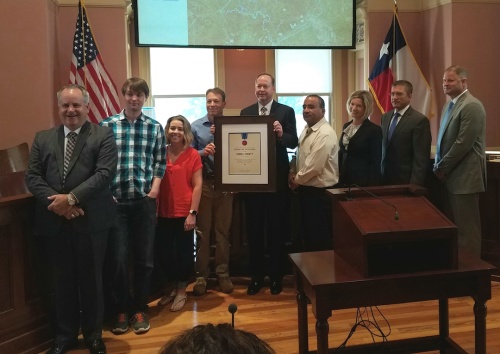 Comal County received the Best Practices Award from the Texas Association of Counties for using innovative practices in its Adopt-A-Roadway Program.

Comal County was the recipient of the Best Practices Award from the Texas Association of Counties, or the TAC, for its Adopt-A-Roadway Program. The recognition was given at Thursday's Comal County Commissioners Court Meeting.

Rick Avery, county relations officer for TAC, said the award is designed to highlight innovation in Texas counties. Comal County’s Adopt-A-Roadway Program uses web-based GIS technology to identify which roadways are available for citizens to adopt and allows them to apply online.

“This is very innovative—this approach you’ve taken to make it easy for people to adopt a roadway,” Avery said.

According to Avery, the TAC received 50 submissions for the award and narrowed it down to eight recipients.

“We think other counties could take a close look at this and do the same in their counties,” he said.

The county provides bags and safety vests to volunteers who clean the roadways and later retrieves the filled bags of trash. In addition to the program saving taxpayer dollars on cleanup costs, “people in the community have a sense of connection to public good,” County Engineer Tom Hornseth said.

At the meeting, Hornseth also gave an update on the renovation of the Landa and Landa Annex Buildings. He presented a plan that will allow operations in both buildings to be relocated during construction, which was not originally planned. Hornseth said vacating the buildings during the process will save time and cost on the project.

Comal County Judge Sherman Krause noted that the Landa Building received its name because it was constructed on the site where the Landa Haus once sat. He pointed out that the annex building is not officially named, but the issue is something the commissioners will likely take action on before new signage is purchased.

The Commissioners Court also approved the acceptance of two grants totaling $30,295.37. A Statewide Automated Victim Notification Service Maintenance Grant allocates $16,995.37 in state funding that will be used to process incoming and outgoing victim calls through a contract with the VINE® Service Center.

The second grant in the amount of $13,300 is a federal Justice Assistance Grant that will allow the county to purchase density meters to assist with locating concealed contraband in vehicles.

The funding adds to the $392,366 in grant funding the county has already received this year, with more being pursued.