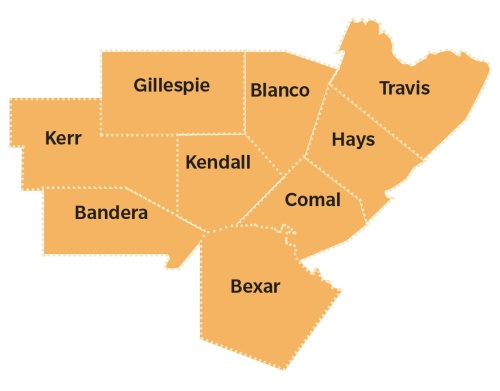 A proposed rock quarry near residential areas is one reason local groups hope to resurrect a bill that could help protect nine Central Texas counties.

As the second fastest-growing county in the country according to U.S. Census Bureau data, Comal County, like others in the Hill Country, is coming face to face with industries that want to set up shop on land that is becoming more and more precious.

Annalisa Peace, executive director of the Greater Edwards Aquifer Alliance and a registered state lobbyist, cites incompatible land use as the reason why the GEAA and other groups in the region hope to resurrect a bill in 2019 that did not get through in the 2007 legislative session.

“We have been working for the past more than 10 years to try to get the state to pass legislation that gives nine counties in the Hill Country area the ability to have some limited land-use control that would be contingent on the voters of each county voting to adopt that authority,” Peace said.

According to Peace, one of the most recent examples of incompatible land use in Comal County is a 1,500-acre rock quarry plant that is planned for a rapidly growing residential area.

House Bill 3447 was first introduced by Patrick Rose, a former Texas representative for District 45, which covers Blanco, Caldwell and Hays counties. If passed in 2019, it would give certain counties the authority to set land-use requirements to help protect citizens and the environment from negative impacts.

At its March 22 meeting, the Comal County Commissioners Court heard concerns from citizens regarding the construction of the rock-crushing plant that is being planned at Hwy. 46 and FM 3009 in New Braunfels.

Following the comments, the court voted unanimously to pass a resolution urging the Texas Commission on Environmental Quality to consider citizen health and safety concerns before approving an air-quality permit that will authorize the construction and operation of Vulcan Materials Co., which operates 15 facilities in Texas.

“The judge and commissioners made clear that although they do not want a rock quarry to be placed in that area, either, the question is really what is the county authorized to do under state law?” said Paul Anthony, Comal County public information officer.

Because Texas counties are not authorized to make decisions regarding general land use, the resolution is an avenue for Comal County to urge the TCEQ and state legislators to use their expertise and authority “to protect the health, safety and welfare of the citizens and environment of Comal County.”

Around 500 Comal County residents expressed their concerns about the rock-crushing plant at a Feb. 27 public meeting, which concluded a formal public comment period, and TCEQ Spokesperson Andrew Keese said the executive director is currently reviewing the comments and preparing a formal response to them.

Vulcan Materials spokesperson Scott Burnham said Vulcan does not yet have a timetable of when the quarry would open, and Keese said the remaining process steps will take several months.

Burnham said Vulcan Materials Co. will next file for a storm water permit and is preparing a water pollution abatement plan that ensures the protection of water quality. The company is also working with the Texas Department of Transportation regarding road improvements at the property’s entrance.

“We’re committed to environmentally responsible operations and protecting the health and safety of the environment,” Burnham said. “The environment guides us in everything we do. We are a heavily regulated industry and will meet or exceed the guidelines that have been established by local, state and federal laws and regulatory agencies.”
SHARE THIS STORY