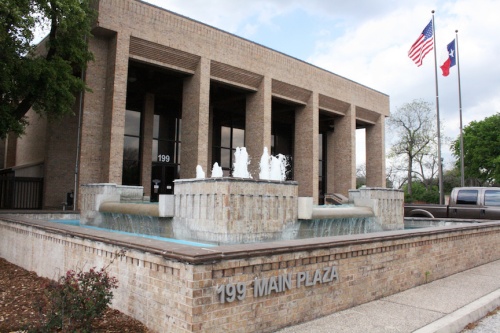 A new courtroom in the Landa Building at 199 Main Plaza, New Braunfels, will addnan additional $4.4 million to a $22 million renovation project.

At its regular meeting April 5 the Comal County Commissioners Court approved renovation plans to add an additional courtroomto the north side of the Landa Building at 199 Main Plaza, New Braunfels.

County Public Information Officer Paul Anthony said that with the region’s rapid growth, the county will likely ask the state Legislature to add a third court at law in the next few years, and combining that endeavor with current construction plans was a budget-conscious decision.

Additionally, Anthony said the new courtroom will slash about $600,000 from the cost of the planned construction at the Annex Building on North Seguin Avenue in New Braunfels, because district court operations will be able to move to the new courtroom space in the Landa Building once renovations begin. Two additional district courtrooms are planned for the annex, which will total four.

The total renovation cost for the two-phase Landa Building and courthouse annex renovations is $22 million, which is covered by county-issued bonds.

The additional courtroom will add another $4.4 million to the project, and the Commissioners Court will discuss a funding source at a later meeting.

The Landa Building renovation project will also include enclosing a high-ceiling area to make space for second-floor office space and extending the front of the building to make
more interior space.