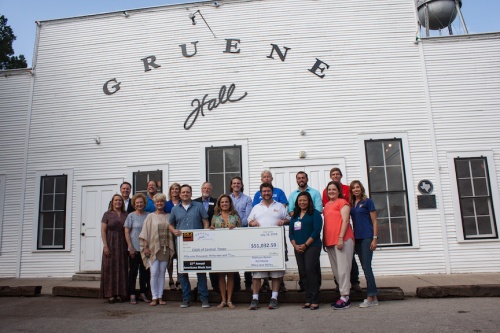 Proceeds from the Americana Music Jam, which took place May 20 at Gruene Hall, are presented to CASA of Central Texas.n

The 22nd annual KNBT Americana Music Jam, which took place May 20, raised $51,032.59 for charity. This year’s proceeds were donated to CASA, or Court Appointed Special Advocates, of Central Texas.

“It's a really big deal to be chosen, so we really, really appreciate that they looked at the work our volunteers were doing in the community, and they wanted us to be able to serve even more children,” said Eloise Hudson, community relations coordinator for CASA of Central Texas, an organization that advocates for abused and neglected children in the court system by recruiting, training and supporting community volunteers.

Hudson said the funds will be used to recruit, train and support more CASA volunteers.

"Every volunteer we have is one more child we can advocate for," she said.

Through the years the Americana Music Jam has raised more than a half-million dollars for various charities in the New Braunfels area. The annual event is presented by New Braunfels’ KNBT radio station and Gruene Hall.