Vulcan's Comal Quarry is one permit away from operation

A coalition opposing Vulcan Materials’ Comal Quarry at the intersection of Hwy. 46 and FM 3009 intends to challenge an air-quality permit approved by the Texas Commission on Environmental Quality in November.

In an email, Vulcan spokesperson Scott Burnham said: “We are pleased with the decision by the TCEQ commissioners to approve the air permit for our proposed facility in Comal County.”•The appeal process could delay Vulcan, which must also receive approval from the TCEQ for a water pollution abatement permit before operations can begin in earnest.

The quarry would create 15-20 full-time jobs.

The water pollution abatement permit application includes items such as a geologic assessment and plans to manage stormwater. Vulcan must also present information on how it will protect the Edwards Aquifer Recharge Zone, which it rests on.

The TCEQ approved the air permit for the 1,500-acre quarry’s rock crusher despite concerns from the community about the accuracy of Vulcan’s core sampling results, a lack of nearby air-quality monitors and a limit on which emissions were considered by the TCEQ.
RELATED STORIES

“The decision demonstrates that we have presented a responsible plan for this site that shows Vulcan is committed to Comal county and doing things the right way. We look forward to working with our neighbors and the community,” Burnham said in an email.

David Frederick is an attorney representing a group of organizations opposing the project. Frederick said the permitting process accounts for the rock-crushing facility but not the mining, blasting or material transportation. 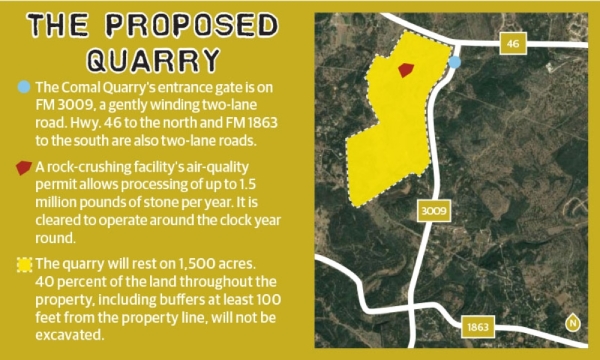 According to Frederick and Milann Guckian, president of Stop 3009 Vulcan Quarry, the appeal process could go as far as the Texas Supreme Court. Guckian said the coalition is working with legislators to pass regulations that could strengthen the community’s appeal against the air-quality permit.

Texas House Bill 2871, which would bolster regulation of aggregate production operations, was introduced by state Rep. Kyle Biederman, R-Fredericksburg, in March. It died in the House Energy Resources Committee. Another bill from Biederman, HB 3798, also failed to gain ground but would “prohibit the operation of a concrete crushing facility within one mile of a building in use as a single or multifamily residence, school, or place of worship at the time the application [is filed].”

On the quarry’s website, Vulcan claims no history of air permit violations in the last 20 years in Texas but admits four stormwater violations in 2014 at its Bexar County operation and another at a different facility in 2013. Vulcan operates more than 60 locations.

Guckian is concerned about the accuracy of Vulcan’s core sampling data used in its air permit application. Core sampling is a process of drilling into the ground to remove a geology sample revealing the properties of the land.

A test of a coring sample obtained 30 feet from a Vulcan core sample site showed crystalline silica content “five times as high” as Vulcan’s results, according to Guckian.

“They did 41 core samples on this property, yet they took their air-modeling data from only three of those core samples,” Guckian said. “They took those samples, and they made them an ideal sample.”

Crystalline silica occurs naturally but is released into the air as a breathable particulate during rock crushing, according to the Occupational Safety and Health Administration. OSHA states that crystalline silica can cause silicosis, lung cancer, chronic obstructive pulmonary disease and kidney disease when inhaled.

Stop 3009 Vulcan Quarry member Liz James is Guckian’s neighbor. They have been best friends for decades.

James’ 99-year-old mother lives with her and enjoys walking their property across Hwy. 3009 from the quarry site. She worries that dust from the quarry will negatively affect her mother.

Vulcan’s Comal Quarry website states that blasting will occur once or twice per month in the first year of operations and will escalate to once or twice every week in years five through 10.

The website continues, “We are required to operate at blasting levels that are proven by the U.S. Bureau of Mines to protect the health and safety of neighbors and employees, as well as the integrity of nearby aboveground and underground structures.”

Kira Olson is not convinced her family will not feel the effects of blasting. Her family’s land shares a fence line with the quarry. Mining and blasting is permitted as close as 100 feet from her property.

A fact sheet from Vulcan states operations will typically last from 6 a.m.-6 p.m. six days per week. That equates to a truck passing through the quarry’s front gate roughly every five minutes in that time window.

“There are really no environmental regulations on rock quarries in Texas,” Frederick said. “The citizens who live in this little band of quarries along I-35—those people just really don’t have any laws that protect them.”
Vulcan Quarry vulcan construction materials Stop 3009 Vulcan quarry bulverde Comal County Texas Commission on Environmental Quality
SHARE THIS STORY

Construction at Creekside Crossing to continue until March

The intersection of Creekside Crossing and I-35 will see the addition of a displaced left-turn lane.

Qualifying individuals can register on the county website to be placed on a waitlist for the COVID-19 vaccine.

The park would occupy 28 acres to the west of North Walnut Avenue.

From a bicycle training studio to a drive-thru margarita store to a Mexican restaurant, many businesses have opened in New Braunfels in the last four weeks.

The trail is part of the city's Hike and Bike Trail Plan that would provide the community with more outdoor recreation options.