DATA: Find out how many people are riding Capital Metro buses, trains 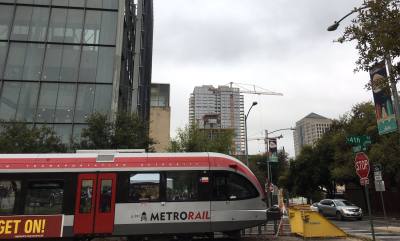 The MetroRail's ridership increased in April 2019 compared to April 2018.

Continuing an upward trend from late last year, Capital Metro has seen an overall rise in ridership so far this year, according to new data from the transit agency.

Capital Metro’s entire transit system has seen an overall ridership increase of 3.8% so far in fiscal year 2018-19 compared to the previous fiscal year, according to the data. This April, the agency's ridership was 8.6% higher than in April 2018.

This points to a new uptick in ridership after an annual decline from 2015-17. Todd Hemingson, executive vice president of planning and development for Capital Metro, said rapid population growth in the Austin area is one of many factors leading to ridership gains.

"More people and more trips being taken in the area expand the market potential for public transportation," Hemingson said.

However, he said the largest factor in the increased ridership is improved and more frequent service through Cap Remap, the overhaul of transit services that occurred last year and that involving adding new routes, rerouting and rescheduling others and eliminating ones that were underperforming.