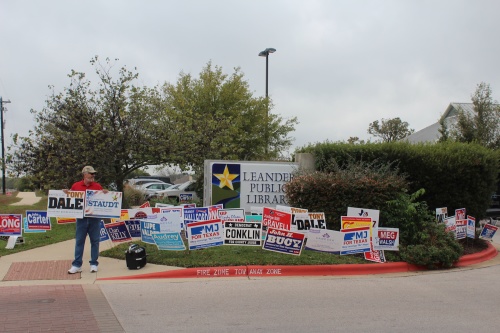 Votes from one iVotronic voting machine from one day of early voting and provisional ballots are not yet counted, according to the county.

Democrat John H Bucy III has won Texas House District 136 with 53.79 percent of the vote, according to the Texas Secretary of State's Office, with 52 of 60 precincts reporting.

Bucy ran against Dale in 2014 for HD 136, but lost by about 13 percent of the votes. Bucy said after that election he concluded he needed to build up a grassroots infrastructure to win. From 2016 to 2017, Bucy served as the Chairman of Williamson County Democratic Party.

“The grassroots work has made a real difference,” Bucy said. “We’ve got a great county party infrastructure that’s been working hard.”

He said he is committed to supporting public schools and access to healthcare.

“With me in the state legislature, you can expect an open door,” Bucy said. “I don’t care if you supported me or not. Come work with me. Let’s make this district have true representation, and let’s fight for the people of House District 136. I’m ready to get to work.”

John H Bucy III is in the lead in the race for the Texas House District 136.

Unofficial early voting results show Bucy received 33,177 votes and Tony Dale received 25,691 votes, according to the Secretary of State’s election results. Dale is behind Bucy by 12.42% of votes.

Dale, the Republican incumbent from Cedar Park, has served as the district’s representative since 2013. Bucy, the Democratic opponent, is a small business owner and recently served as chairman of the Williamson County Democrats, according to his campaign website. The third-party candidate Zack Parks, a libertarian, received 2.34% of votes.

This story will be updated as Election Day votes are released. All results are unofficial until canvassed.