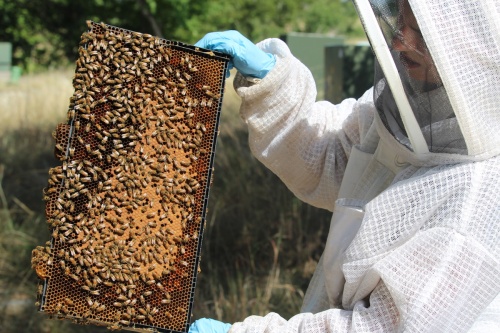 Frank Stiles is a fourth-generation Leander resident and veterinarian at the South San Gabriel Animal Clinic. When he first began his practice in 1986, around half of his patients were horses, cows, goats and sheep, he said. Now, he estimates around 98 percent of his job is serving small animals.

“Most of the farmland [and] most of the cows are gone now,” Stiles said.

In addition to beef cattle and other livestock, he said the Leander area used to see a lot of cotton production with three cotton gins in the area. The gins closed by the 1960s, he said.

Historian and Leander resident Karen Thompson is the chairwoman of the city’s Historical Preservation Committee and has authored numerous books about the history of Round Rock, Texas and Williamson and Travis counties.

Thompson said settlers—primarily from the Carolinas, Tennessee and Virginia—came to the Leander area in the 19th century after receiving land grants, sometimes as a reward for fighting in the Texas Revolution. Some brought slaves with them. After the Civil War, some of the former slaves worked as farm labor while others operated farms, Thompson said.

Before Leander was founded, a town called Bagdad was created near where present-day Hero Way West intersects with Bagdad Road, according to Thompson and the book “Land of Good Water” by Clara Stearns Scarbrough. Thompson said Bagdad was the largest town in western Williamson County up until Leander was formed in 1882.

“The primary land [use] for Bagdad was to raise crops and to raise livestock,” she said.

Thompson said most families had cattle, and some had sheep, goats and hogs. The U.S. Census in 1850 showed that Williamson County contained over 21,000 cattle, including working oxen, dairy cows and other cattle. In 1900, that number had jumped to above 54,000 cattle.

A public works project—the Mansfield Dam—partially funded through the New Deal in the 1930s changed the employment scene in the area. For many young men, this was their first job outside of the family farm, Thompson said.

In 1950, Williamson County was 95.5 percent farmland, according to that year’s U.S. Census of Agriculture. That percentage dropped to 72.5 percent in 1987, the year after Stiles began his veterinary practice.

“For Williamson County as a whole […] and barring the exception of one year, […agricultural land] has been under decline give or take by 1 percent for the last 10 years,” said Aaron Stenulson, the land and agricultural manager for WCAD.

WCAD data shows that in 2007, 569,838 acres in Williamson County received the agricultural valuation—which includes property used for livestock, crops, wildlife management, orchards and beekeeping. This dropped to 497,175 acres in 2018.

“The best use of this land today […] is not ranching; it’s development,” said Jody Giddens, whose family has a history of ranching and farming in Leander.

While the percentage of agricultural land in the city of Leander and Williamson County is declining, the way farming is practiced may be changing as well.

Tyler Coufal, the agricultural agent for the Texas A&M AgriLife Extension-Williamson County, said that there has been an emphasis on goats and sheep in the western part of the county recently.

“As landowners’ [property] continue to decrease in size, people have to find a way to still have their agriculture ventures,” Coufal said.

Pastures for farm animals are the largest agricultural use in Leander, according to WCAD data. Coufal said that this is likely because of the soil in the west side of Williamson County.

“The depth of soil on that side of the county is very, very limited,” he said. “The problem is a lot of the plants, a lot of, say, crops for instance, they’re not allowed to develop those roots systems that they need to get the proper water, to get the proper nutrients.”

Isle Acre Farms is a 1 1/2-acre farm that sits on Thompson’s property on Hero Way West in Leander and is run by Pete and Becky Tamez.

“We are so lucky,” Pete Tamez said. “This area […] is flood plain. Being that it is a flood zone, it’s also a sediment area.”

That means fertile soils have been deposited on the property over time, he said. Isle Acre Farms grows a variety of vegetables over the course of a year, including mixed greens, radishes and onions, the Tamezes said. They sell their produce to restaurants such as Burnt Kitchen in Leander and at local markets, including the new Old Town Farmers Market at Smooth Village.

Pete Tamez said he calls what they do “pioneer farming” because unlike some contemporary farmers, Isle Acre Farms does not use tractors, pesticides or any other sprays or automated machinery. Instead, they use compost and modern hand tools, they said.

“Agriculture has embraced technology, and many jobs our students will have may not even exist yet,” Kelley said.

He said most of his students are from the suburbs, at least a few generations removed from ranching and farming, and have their first experiences with agriculture in the classroom.

The National FFA Organization, a student group focused on agricultural education, has a presence in all Leander ISD high schools, after Leander High School’s chapter was formed in 1948, according to LISD. In total, 1,287 current LISD students are members of the FFA, according to district data.

Kelley said the most popular agricultural projects for students are stock show animals, although some also “love the garden and orchard” and others complete welding projects.

“I believe that the future of agriculture for young people is very promising,” Kelley said.