As population grows, city of Leander looks to expand its parks system 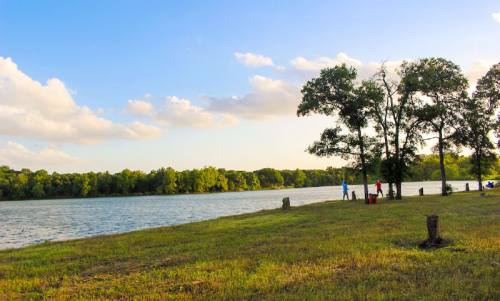 Visitors to Lake Lakewood fish in the lake at site of the city of Leanderu2019s future Lakewood Park last June.

Corrected Feb. 23 at 5:41 p.m. The article previously stated that the city's would begin accepting bids for the comprehensive plan project on Feb. 22. Bids closed on Feb. 22.

This spring approximately 400 children registered for Leander’s Little League program—up from around 225 players enrolled in spring 2017, according to Leander Recreation Director Heather Taylor.

“The growth is uncontrolled right now, so our programs are having to accommodate that growth,” she said.

To address these needs, the parks department will consider adding additional facilities in the upcoming years, including a new baseball field at Benbrook Ranch Park, said Mark Tummons, director of Leander’s Parks and Recreation Department.

Tummons said the parks department plans to create a comprehensive plan, expected to be complete by the end of 2018.

“Part of our comprehensive plan is balancing [land] acquisition and [the] development of public spaces,” he said. “We really need to look at our entire city, from city limit to city limit, to ensure that we are placing parks where they need to be for [the] long-term.”

The city accepted bids for the parks comprehensive plan project from Jan. 25-Feb. 22, with a consultant potentially selected in March, according to city documents and Tummons. The plan will take approximately eight to 10 months to complete.

Another feature of the comprehensive plan could include a setting a goal for the number of parkland acres per resident, Tummons said. He said he wants every city resident to live within a 10-minute walk of a park.

As of Feb. 7 there are approximately 7.69 acres of city-managed parkland per 1,000 residents in Leander, a number expected to change as new city parks are developed, according to city spokesperson Michael Neu.

“We should be, for a community of our size, our capabilities, that [number] should be doubled,” Tummons said.

Both are above the national average of 9.6 acres of government-run parkland, including city and county property, per 1,000 residents, according to the National Recreation and Park Association. Tummons said “most vibrant communities” have between 18-20 acres  of parks per 1,000 residents.

Another aspect of the comprehensive plan could be examining Leander’s parkland dedication ordinance, Tummons said. The ordinance requires developers to contribute to the park system with several options, such as dedicating public or private parkland or paying a fee in lieu of dedication.

“A developer would prefer to develop their own parks and open spaces that benefit that specific community, rather than paying into a fund that will benefit another part of the city,” said David Glenn, director of government affairs for the Home Builders Association of Greater Austin. “Whether or not a developer opts to dedicate the parkland or pay the fee in lieu is dependent on the cost of the land, and the benefits of the parkland must outweigh the cost of building fewer units.”

Aside from the parkland dedication ordinance, the city can use bonds and grants to purchase parkland. Tummons said the department could potentially look at other options, such as working with corporate partners or future schools, and that in the next several months, his department plans to create a City of Leander Parks Legacy Foundation to finance parks projects, including land acquisition.

“There are residents with large tracts of land, who may have property in their family for generations and may not want to sell all to the highest bidder … but reduce, sell, or even donate some of their prized ‘park-like’ land for future generations to enjoy,” Tummons said. “The foundation is the perfect place for them to accomplish this through.”

As Leander’s population has increased, so has the city’s home values. Rising property values could cause challenges for the parks department as it works to expand parkland in the upcoming years.

Tummons said government agencies are usually hesitant to pay more than fair market value for land based on appraisals, which often become “out of date” in  real estate markets like Leander. Additionally, property desired as parkland may be sold before the city can take action due to the vetting process necessary for land acquisition.

Once complete, the comprehensive plan may be able to speed up the process of land acquisition. The parks director said the plan will identify general areas and types of parks needed before land becomes available.

“The next step is working with [the] city manager/finance [department]/council during the budget cycle to develop a capital improvement plan that funds acquisition of property as those properties become available, creating a parkland acquisition fund,” Tummons said in an email.

Jayne Serna, Leander Parks and Recreation Advisory Board chairwoman, credits the city’s 2016 bond election with creating “much to look forward to in Leander.”

“Developing and completing the bond projects will meet so many of the trails, parks and facilities needs of our community,” she said.

The bond included funding for new parkland and developing or improving existing parkland as well as funding for a recreation center and senior center, according to city documents.

The bond’s Proposition No. 2 featured funds for projects like the design and construction of city trails, Robin Bledsoe Park synthetic turf fields, improvements at Veterans Park, and the creation of Lakewood Park and San Gabriel River Park. Many of these projects are underway or complete. A ribbon cutting for the new Robin Bledsoe Park athletic fields—named after Jayne and Gabriel Serna—was held Feb. 8, and construction on Lakewood Park is set to begin this summer.

“I think few things will compare [to] the natural beauty of the setting at Lakewood Park,” Jayne Serna said. “This regional park will have water access, trails, open spaces—almost anything you could ask for in a park.”

Lakewood Park will be around 125 acres and tentatively could include a splash park, sports courts, playgrounds and a large open greenspace when complete. The first phase, which may feature trails, a fishing pier and kayak area, may be complete in 2019, Tummons said.

Lakewood’s development includes land donated as part of the parkland dedication ordinance, and project funding contributed through the city’s 2016 bond program and a grant from the Texas Parks and Wildlife Department, Neu said.

Initial design work on the city’s upcoming senior activity center is occurring now, and Tummons said he expects a draft of the design to be ready in March.

Community Impact Newspaper previously reported that the Austin-Round Rock Metropolitan Statistical Area’s senior population, defined as ages 65 and older, is expected to increase by 227.2 percent between 2017 and 2050. The activity center will meet the needs of this population, which is expanding as the city gains new active adult housing, Tummons said.

Taylor said the department wants to offer the same quality of programs that it has offered in the past but at larger scale to accommodate growth. For example, previously, active adult field trips took place every other Wednesday, but now the department added extra evening and weekend events.

“I just want to see more involvement in city-sponsored city programming, city youth leagues [and] adult leagues,” Parks and Recreation Manager Tyler Bybee said. “We have to have the staff to do that.”

He started working for the city at the end of 2017 and said his role was added to the department due to the increase in needs because of the city’s growth.

“The plan is to add additional staff fairly rapidly over the next few years as we grow,” he said. “The comprehensive plan is going to give us that path.”