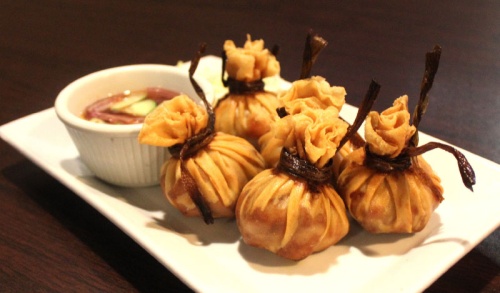 He spent the first 14 years of his life in Thailand before moving to the United States. During family gatherings and holidays, tables would overflow with traditional Thai cuisine—bowls of rice, curry dishes and stir-fry platters.

Now owner of Chada Thai Traditional Taste in Cedar Park, Nakavisute is far from his roots, but family remains an important part of his restaurant.

He began Chada Thai in late 2013 after graduating from The University of Texas at Austin with an engineering degree. When his mother’s restaurant job in Austin came to an end, he shifted his career path and decided to open up a restaurant with her.

“I saw an opportunity in this area,” Nakavisute said. “They didn’t have any Thai restaurants.”

He had worked in restaurants during his teenage years, so the transition felt natural, although starting a business came with its own slew of challenges. He worked weeks on end to get the restaurant up and running.

With family recipes to draw from, Nakavisute found a spot in the 1890 Ranch shopping center in Cedar Park.

He filled the menu with spicy curries, pad thai, basil stir-fry and other Thai cuisine from various parts of Thailand. His mother began working in the kitchen to ensure dishes had the right amount of spice.

“We try to be as authentic as possible,” Nakavisute said. “We cater to our customers, but we still want to keep our originality.”

The name “Chada” harkens back to Thai culture. The word refers to the golden headdress worn by traditional dancers, Nakavisute said. The pointed crowns are typically made of gold and decorated with gemstones. Photos of these headdresses—and a replica—decorate the walls of Chada Thai.

Nakavisute said the growth in Cedar Park has helped his business, and the number of customers has increased every year since he began. He said about half of his customers dine in, while the other half order takeout.

The most popular dishes on the menu remain garee, a spicy yellow curry, and the pad thai, Nakavisute said.

When building the menu, though, Nakavisute made sure one dish in particular was on it: kra pao, a basil stir fry with a fried egg. When asked why, his answer is simple. It is a staple of Thai cuisine, he said, and it reminds him of home.

“I grew up eating that almost every day,” he said.

What is a chada?
Chada refers to a traditional crown worn by dancers in traditional Thai performances. It symbolizes highness and prestige, and it is typically made of gold.
SOURCE: CHADA THAI/COMMUNITY IMPACT NEWSPAPER