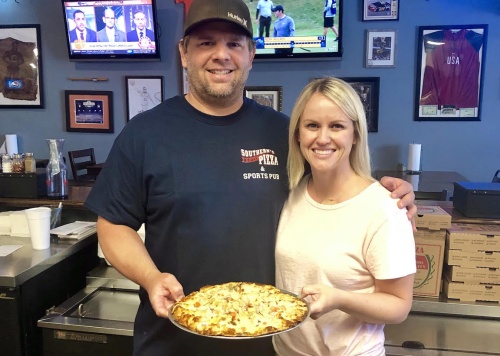 Ben and Abby Southern have been in business for 10 years in Leander.

It was 2007, and the Great Recession had just started digging its teeth into the local economy.

“We came right when the economy was bad,” he said of his 1,600-mile move from Clovis, California. “Everyone was scared; gas was high. Not the best time to start a business.”

But Southern saw an opening. Leander, then a small town, had very few restaurants, and he was convinced a pizza place—and the recipes he developed in California kitchens—would find a home.

Southern’s Pizza and Sports Pub on South US 183 is celebrating its 10-year anniversary.

Since April 2009, Southern and his wife, Abby, have been serving pizza and other pub food to families, youth sports teams and other dedicated customers.

Between moving to Leander and opening the restaurant in 2009, Southern met Abby.

“I didn’t know what I was getting into,” Abby joked on a Thursday at the restaurant as she checked on a Hawaiian pizza baking in the restaurant’s large oven.

“We just needed a bigger place with more parking,” Southern said. “We were getting busy.”

Southern’s popularity has grown beyond Leander’s border. On a recent afternoon, Ron and Cyndi Crawford sat at a table and ordered a Hawaiian pizza.

Ron said once a month, they drive more than 20 miles from their Sun City home to eat a pizza at Southern’s.

“It’s the best pizza around,” Cyndi said over a slice.

Despite their success, the Southerns said they have no plans to open a second location.

The Southerns said they enjoy the close relationship they develop with their customers at one location.

“This is right where we want to be,” Abby said.