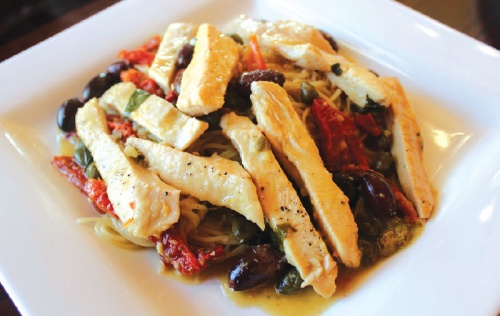 Bella Sera of Leander may be a  franchise, but owner Arber Gashi says it is far from the cookie-cutter, impersonal notion that most people associate with such restaurants.

Gashi and his family have been working to create an eatery with the atmosphere, staff and food he says customers won’t find elsewhere in Leander.

“It’s real Sicilian-style food,” he said. “We’ve done this for 25 years now. You can eat the same dish today and come back in 10 years and it’ll taste the same.”

Leander’s Bella Sera opened in January, and Gashi prides his business on serving northern and southern Italian cuisine along with a selection of steak, seafood and house specialties.

Gashi’s uncle Johnny Mustfa owns the franchise, came up with the menu and has opened and trained the chefs at the Bella Seras all over Texas. The company also has eateries in Boerne, Fredericksburg, Georgetown, Kennedy, Kerrville and Marble Falls, all of which Gashi said are owned by cousins and members of his family.

Gashi said he loves the way Bella Sera keeps the business in the family and how he worked along with his uncle for four years at the Marble Falls location before opening in Leander.

“To be honest, I just wanted to try on my own and so far it’s been really good,” Gashi said.  “We always help each other—it’s a family.”

He said one of the most important lessons he learned at the Marble Falls Bella Sera was leadership. He carries over that approach to Bella Sera in Leander where he does everything, including help repair a bench outside the restaurant on an August afternoon.

“Here I do everything,” Gashi said.  “If someone complains, I talk to him and make sure he leaves happy from my store.  We want them to keep coming back.”

Gashi and Mustfa opened Bella Sera in Georgetown a year ago, and Gashi knew then that the Leander location would be ideal because it is surrounded by residential neighborhoods near US 183, a high traffic area. Gashi hopes the combination of quality food and a large customer base will have people enjoying nice evenings at Bella Sera of Leander for years to come.

“We try to target more families,” Gashi said. “Our goal is to keep the good quality of the food and good service. The food might be perfect, but if the service isn’t in the right level, it would destroy everything that we worked for.”