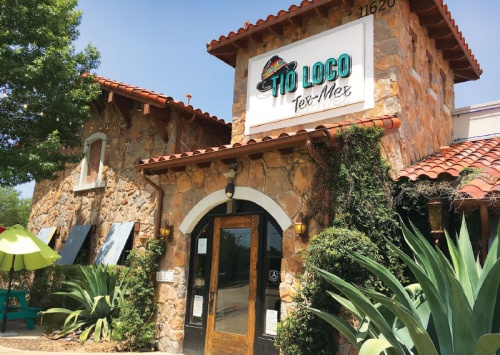 Tio Loco Tex-Mex has only been open for 10 months, but for owner Kirby Walker, being in the restaurant business has been a labor of love since he graduated from The University of Texas in 1981.

“[At Tio Loco] we win people by doing a great job day in and day out,” Walker said. “You take care of the customer one at a time—as many people as you can touch, and eventually what happens is that ember grows and the fire spreads pretty quickly.”

One of Tio Loco’s specialties is the brisket enchiladas with slow-cooked, mesquite-grilled brisket topped with jalapeno-lime cream sauce and served with a side of beans and rice. The dish may be paired with the house frozen margarita, which comes with a flute of Mexicano Alteno reposado tequila.

“We want items that are unique, but we want to be defined by the good, solid, go-to Tex-Mex,” Walker said. “We want to meet people’s expectations. ... So we have great chips and salsa, great margaritas, [and] no surprises in your tacos and enchiladas.”

Family is important to Walker and his wife, Kathy. Their daughter also works at Tio Loco, and the restaurant’s name is a tribute to Kathy’s brother, Gary Williams, who died before the restaurant opened. There are pictures of Williams along Tio Loco’s back wall.

Although Central Texas has many Tex-Mex eateries, Walker said market saturation is not problematic.

“I had a guy tell me a long time ago, ‘You need to fish where the fish are biting,’” Walker said. “There’s no product with a stronger demand in this market than Mexican food. Granted, there’s a lot of them out here, but there’s a reason for that—people love it.”