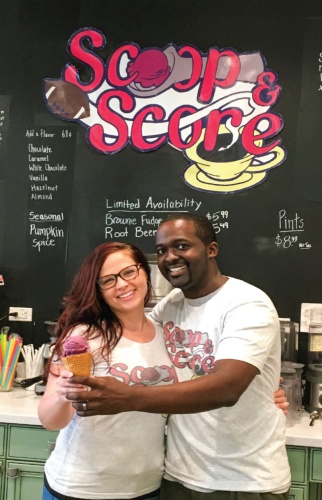 All is quiet at this time of year at John Gupton Stadium, which sits across East Park Street from Alex and Angela Ellis' ice cream parlor, Scoop & Score Ice Cream and Coffee Parlor.

The shop’s name refers to a situation when a defensive player recovers a fumble and returns it for a touchdown, a play that often lifts that team and changes the energy of the game.

Alex and Angela are hoping their first-time customers will have the same experience when they try Graeter’s, a Cincinnati-based ice cream served at Scoop & Score.

“In general, I just want people to have the same feeling I have when I eat Graeter’s ice cream,” Alex said. “No matter what’s going on, it’s just a refreshing, great ice cream to eat.”

On the football field, scoop and score takes a second to develop, but the story of the parlor was not as quick.

The Ellises are Ohio natives who met at The University of Akron. Alex had visited family in Texas and brought Angela for a visit when they decided to move and raise a family.

“I thought I was on vacation, but it was a recruiting trip,” Angela said.  “Ohio is always going to be home, but I hate the cold."

The idea to open the parlor came to Alex a few years ago when Angela was pregnant with their daughter Eve.

Angela was craving Graeter’s, which produces ice cream and gelato lines using small-batch, artisanal methods of production, but she could not find it hundreds of miles from Ohio.

“I was so frustrated,” Angela said. “I was literally driving to every ice cream shop and I was like, 'nah.'”

Scoop & Score opened in September 2016, and Angela left her job as an accountant at a software company to help run the business. For the inside decorations, she wanted to blend a football theme with the rustic decor of the shop, but geared for kids.

“We kind of want it to be a sport bar for kids,” Angela said. “That’s kind of why we have the bar with the TV so they can come after school, watch their cartoons and eat ice cream.”

Alex hopes Scoop & Score becomes a Cedar Park institution over time and people will see why the parlor’s slogan is “The best ice cream in Texas.”

“When people start tasting it here, I think it could be like Round Rock Donuts where we have people coming from all over,” Alex said.