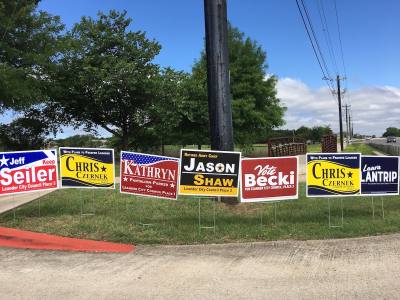 After early voting showed them substantially in the lead, all three candidates remained ahead as election day results rolled in.

"I'm very excited for Leander," Shaw said. "I'm happy for the people and I look forward to serving them and making a difference."

Kathryn Pantalion-Parker, Jason Shaw and Chris Czernek have significant leads over their opponents in the election for Leander City Council Places 1, 3 and 5 respectively, according to unofficial early voting results from Williamson County.

All results are unofficial until canvassed, a process to certify votes must take place within 11 days of this election, according to the Texas Secretary of State’s office.

Pantalion-Parker has earned more votes than her opponent, Laura Lantrip, for Place 1 with 66.17% of early votes. With 68.07% of the votes, Shaw has a substantial lead over opponent Becki Ross for Place 3 on council. Chris Czernek, who is taking on incumbent Jeff Seiler for Place 5, is winning with 65.35% of early votes.

The three candidates in the lead also garnered the most campaign funds and were all supported by the Texas Stronger PAC, which supported Mayor Troy Hill in the 2018 election.
SHARE THIS STORY