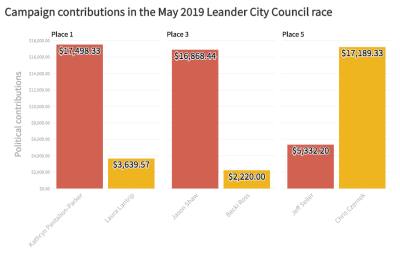 This chart shows the amount of money raised by each candidate in the Leander City Council May 2019 election.

Updated at 4:15 p.m. May 1 to clarify information regarding candidate Laura Lantrip's expenses.

With election day less than a week out, Leander City Council candidate Kathryn Pantalion-Parker has earned the highest number of campaign contributions and the largest amount of money out of any candidate running for council.

City Council candidates running in the May 4 elections were required to submit campaign finance reports April 4 and April 26. These reports show how much candidates have received in political contributions as well as how much they have spent during their campaigns.

Pantalion-Parker raised $17,498.33 through 38 donations, according to campaign finance documents. Including Pantalion-Parker, all three candidates to receive donations from the Texas Stronger PAC, which previously supported Mayor Troy Hill in the 2018 election, have out-earned their opponents.

Voters will weigh in on three contested seats for City Council. Early voting ended April 30. Election day is May 4.

You can also read all of the complete campaign finance reports on the city of Leander’s website by clicking here.

Kathryn Pantalion-Parker has raised $17,498.33 so far in contributions and spent $10,826 in political expenditures.13 Her largest contributor was the Texas Stronger PAC, which donated $5,333.33. She had 38 total donations.

Laura Lantrip reported $3,639.57 in political contributions and $11,742.65 in expenditures. Lantrip said her actual expenditures were $6,869.79, but that due to the format of the campaign finance forms, credit expenses were counted twice—credit charges and the payments to the credit card company each included separately. Lantrip’s largest donor was psychiatrist Dr. Kathryn J. Kotrla of Leander. Kotrla donated $504.15 in her name and $500 with Robert L. Morris. Kotrla donated to Lantrip’s opponent, Pantalion-Parker, and several other council candidates as well. Lantrip had 12 donations.

Becki Ross received $2,220 in political contributions and has spent $3,977.56, funded in part from loans from her company, Rebecca Ross Insurance Agency Inc. Her largest donor was William Pohl of Pohl Partners Real Estate Group, who donated $1,000. Pohl also donated to her opponent, Shaw, and other candidates. She had four donors in all.