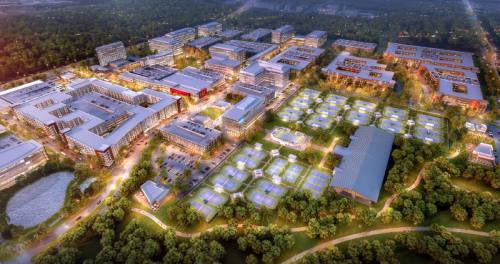 Indigo Ridge, anchored by the U.S. Tennis Association Texas, is projected to be worth more than $1.5 billion at build-out. Here is what is in store for the city as the mixed-use project rolls out.

In what the mayor called a “historic” meeting, Cedar Park City Council entered an initial agreement with the developers of future mixed-use project Indigo Ridge and the United States Tennis Association Texas on March 14.

The headquarters of USTA Texas are set to anchor the development, which will sit on a 155-acre property at the northwest corner of East Whitestone Boulevard and Sam Bass Road near the city’s border with Round Rock.

Indigo Ridge is planned to include office space, hotel space, residential options, retail, restaurants and entertainment. Its projected value at build-out is over $1.5 billion, according to a March 14 statement from the city of Cedar Park.

“It’s a tremendous win for the city,” White said at the March 14 meeting. “It is going to be the largest project in Williamson County—it is massive. And this creates the employment hub center for the [Austin-Round Rock metropolitan statistical area] right here in Cedar Park, and so we’re thrilled to have that.”

MOVING TOWARD AN AGREEMENT

Cedar Park plans to work with Williamson County to provide one or more economic development incentive agreements to Indigo Ridge Development Partners and USTA Texas, per the memorandum of understanding.

The city intends to enter into a 380 agreement with incentives not to exceed $60 million over a 20-year period, White said. White said the development has to build before it receives any financial benefits; in other words, the incentive is performance-based.

Official arrangements have yet to be determined and will be laid out in the completed agreement, according to Cedar Park spokesperson Jennie Huerta.

The memorandum of understanding is a preliminary document and an economic development agreement laying out the details of the agreement should be complete by mid-June, according to White.

Indigo Ridge Development Partners has been working with the city for over a year. Last summer, council approved rezoning for the property to allow for mixed-use development.

Now, Brian Cassidy—legal counsel for Indigo Ridge Development Partners and managing partner of Locke Lord LLP’s Austin office—said construction plans are under review with the city of Cedar Park, but it is critical that incentive agreements with Williamson County and Cedar Park are put in place as well.

“They’re kind of an internal deal—the only real difference between the two districts is that the West District allows for two additional uses, that are really employment-related, that are not necessarily allowed in the Village District,” said Todd Madden, operating principal for Indigo Ridge Development Partners and president of Thompson Morris, a real estate development firm. “The Village District will be a little bit more focused on that lifestyle amenity. … [The West District] allows for some employment opportunities that are not allowed in the Village District, [such as] manufacturing.”

The project will include housing, shopping, dining and office space in addition to  the USTA Texas facilities. The tennis campus plans to include about 40 outdoor tennis courts, six to eight indoor tennis courts, a stadium court, and other amenities for competitions and training.

“Employers today are looking for things that accommodate their workforce needs and desires,” Cassidy said. “This offers such a great quality-of-life aspect to it, and it becomes a great center for employers and their employees.”

Madden said creating a site that offers so many lifestyle amenities may attract more large employers to the area.

“We really do think that Indigo Ridge will provide an opportunity and environment that is needed to create the major employment hub for the whole northwest market, that region up here,” he said.

Michael Kennedy of Avison Young, brokers for the project, said in the March 14 statement that the USTA Texas headquarters specifically would be a “draw for other corporate relocations to Indigo Ridge,” along with Apple’s expansion and other companies in the area.

New employment opportunities may be brought to Indigo Ridge even before it is open to the public. Cassidy said around 500 workers may be utilized during construction, although he noted it is difficult to determine an estimate at this time. He said Indigo Ridge Development Partners anticipates using local contractors, although in what capacity he is not yet sure.

“We’re still assembling the team, so it’s hard to identify which local contractors or what roles they’ll fill,” Cassidy said. “This is a first-class project, so we’re going to get the talent that [will] best develop the project.”

Cassidy and Madden said they are aware of regional issues regarding a lack of construction materials and labor but are not concerned as they will keep those issues in mind while putting together their team and schedule.

Williamson County Judge Bill Gravell said that with projects like these, the county is “rapidly becoming” a Texas hub for recreational sports—with teams such as the Round Rock Express, Austin Spurs and Texas Stars all playing home games in Williamson County.

“I didn’t understand the weight of this project until I understood that the USTA has major complexes like this across America that host weekly tennis tournaments,” Gravell said. “Think about the economic impact of that—if you can bring in 100 men like that on a given weekend from Dallas, Houston, San Antonio, Oklahoma. The economic impact of that is pretty incredible.”

With nearly $139 million in new tax revenue expected to come from Indigo Ridge within 20 years, Cedar Park Mayor Corbin Van Arsdale said the project would diversify the tax base, offering relief to taxpayers.

“Those numbers … that allows us to take a lot of pressure off of property taxes for our residents when you deliver projects like that,” Van Arsdale said. “It’s a big deal to have that kind of deal.”

However, Cedar Park resident Letha Sparks is opposed to the project due to potential traffic increases and strain on infrastructure.

“More schools [will be] needed for the kids (so higher school taxes); more police and fire response teams [will be] needed (so higher local taxes),” Sparks said on Nextdoor.com. “Yes, new development is always touted as going to supply a big influx of money to the local treasury, but for some reason the infrastructure needs eat up whatever gains you think you’ll make with local revenue. I hope it doesn’t happen.”

Other commenters on Nextdoor.com had mixed thoughts.

“I’m both in favor of it and opposed to it,” said Virginia Craig of Leander. “I am in favor of it as it will bring revenue to [Cedar Park], many new jobs, more choices in fine dining and casual places for friends to gather. ... My opposition is obviously the traffic.”

Craig said she is “greatly opposed” to USTA Texas’ headquarters, stating there are better places for the facilities in Cedar Park than in a shopping area.

Infrastructure improvements, such as road and utility improvements, will be incorporated into all six proposed phases of Indigo Ridge’s construction, according to the memorandum of understanding with the city.

Indigo Ridge Development Partners intends to start construction of Phase 1 by mid-September, according to the document.

This phase includes the tennis facilities, 374,000 square feet of commercial development and a number of infrastructure projects: deceleration lanes on Whitestone, two new roads—Indigo Ridge Boulevard and Vista Isle Drive West, a traffic signal and other intersection improvements at Whitestone and Indigo Ridge Boulevard, plus public sidewalks and drainage and utility infrastructure.

“From the very beginning of this we have been working hand-in-hand with the city [of Cedar Park],” Madden said. “We went and talked to the city about what their vision was and made sure that we’re in lock step with what the city’s vision for the site and this area was as well.”

The first phase could be wrapped up within 18-24 months, according to the document. Phases 2-6 are expected to roll out one a year between 2021-25, according to meeting documents.