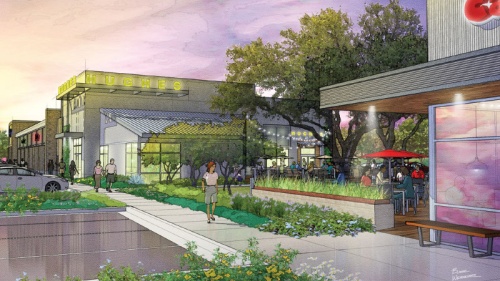 Both Cedar Park and Leander have looked at possible projects that could bring a mix of usesu2014such as retail, restaurants and residential optionsu2014into a walkable development. One of those projects, Presidio, plans to open its first phase this year.n As lease costs in Austin rose, the owners of CMP Management Inc. began looking to relocate from their spot in the Arboretum in Northwest Austin about two years ago.

The management service provider has 20 employees, and President Carolyn Price said most of those were commuting from areas such as Cedar Park and Leander. She said the company moved into Leander’s Old Town district in July.

The city of Leander designed Old Town to be a mixed-use district, which allows for a blend of different uses, such as office, retail and residential, within the same building or development parcel.

“[The commute and cost of rent] was what initiated [our move], and having an environment where you’re not in a traditional office space and plaza-type building—it being more of that community feel—was really attractive to us,” Price said.

In the past few years, city leaders in both Cedar Park and Leander have shown a desire for more mixed-use developments. Robert Gibbs, the founder of the Michigan-based consulting firm Urban Retail Institute and a consultant for a proposed mixed-use project in Leander, said the growing desire is common. He said interest has grown with the trend of “empty nesters” wanting to downsize from single-family homes and millennials wanting walkable neighborhoods.

“We’re seeing the conversion of two big markets, and a lot of communities are reacting to that and wanting to build [mixed-use] town centers,” he said.

The desire for mixed use

Both Cedar Park and Leander updated their comprehensive plans to outline goals for the cities in the past few years, and the documents expressed a desire for walkable districts with a mix of uses in certain locations.

In Leander’s plan, several areas around the city were identified as ideal for mixed-use centers ranging from larger spaces with a higher mix of commercial uses to smaller spaces with more residential. In the city’s comprehensive plan, the spots are defined as “destinations within the community.”

“[Mixed-use districts] tend to be types of places that generate good place-making; they are places where people want to be,” Assistant City Manager Tom Yantis said. “They tend to be places that are more desirable, instead of your typical strip commercial corridors that we’ve seen in the past.”

Cedar Park City Council repealed and replaced its zoning ordinances in November, and multifamily residential was one of the updated categories. Amy Link, assistant director of development services, said that from now on anyone requesting a multifamily development will need to incorporate mixed-use into the project.

“Moving forward as outlined in our comprehensive plan, any new multifamily development is proposed to be in a more urban, mixed-use-type development as opposed to the kind of traditional garden-style apartments that we’ve had developed over the past several years,” she said. “We’re going in a more compact and urban form.”

Gibbs said many cities want these types of developments in order to be more sustainable.

“[Suburban cities] are afraid they have too much of the same housing product, the same strip center product, and that they don’t have the variety that they need to be sustainable,” he said. “A lot of them are finding that they’re losing tax base and/or they’re losing population to [mixed-use town] centers.”

Gibbs said mixed-use town centers must have residential, office, civic and retail land uses in the developments. He said these types of centers have higher property values, produce more tax base for a city and have stronger retail sales compared to traditional developments. He said his firm has seen town center retail sales outperform suburban strip centers by about 30 to 40 percent.

Phil Brewer, Cedar Park economic development director, said some employers have been interested in being in or close to a mixed-use district in Cedar Park in the past 12-18 months.

“Mixed-use projects are gaining more momentum, particularly by technology companies these days because their employees want the convenience of being able to walk to everything,” he said.

The risks of mixed-use

Leander City Council Member Troy Hill said he questions whether the centers are currently economically viable in a more rural city like Leander. He said he worries the city does not yet have the demographic mix or amount of population needed to support the projects.

“I think it has real hurdles if you try this in a suburb and you don’t do it the right way,” he said.

Hill said he is supportive of private developers building these types of projects, but he is hesitant to vote in favor of giving taxpayer funds to the projects through economic incentives.

“It’s easier for them to do that, rather than waiting until they’re mostly developed, because prime spots are going to be taken,” he said. “It also helps them attract better employment centers and residents if they have a town center.”

Gibbs said the global nonprofit group Urban Land Institute and the U.S. Census Bureau project that most offices will be in mixed-use town centers in 10 years.

“I think suburban sprawl was a 50-year trend, because urban living has been around for 4,000-5,000 years,” he said. “I think we’re just coming to the end of the bad suburban sprawl experiment, and we’re returning to traditional development patterns.”

Several mixed-use-type developments are underway or are being considered by both cities.

In Cedar Park, the first phase of Presidio will be ready by the end of the year, according to a representative with the development. Presidio is located at the southeast corner of Parmer Lane and Ranch Trails Court, and the first phase includes 25.5 acres of a 100-acre community with office buildings, retail buildings and urban loft-style apartments.

Two age-restricted residential buildings are also under construction on Juliette Way, according to the city of Cedar Park. The horizontal development is planned to have urban-style residential development, along with retail, office and hotel uses.

According to Cedar Park city documents, a 38-acre residential and commercial mixed-use development called Cross Creek is under consideration at the southeast corner of
East Whitestone Boulevard and Toll 183A. Plans have also been submitted for an 8.9-acre vertical mixed-use project called Quest Village at 910 Quest Parkway.

The city of Cedar Park is also in the beginning stages of realigning a portion of US 183 near Buttercup Creek Boulevard, which will open up space that city leaders hope to create into a mixed-use district in the future.

Trailside Oaks, an 8.5-acre residential townhome and commercial project, is proposed on the northwest corner of Hero Way and Toll 183A. A 70-acre horizontal mixed-use project called Northline, which could have residential, retail, a hotel, a grocery store and entertainment options, is also proposed on the corner of San Gabriel Parkway and Toll 183A.

As the president of a business, Price said she thinks a rise in the development of mixed-use districts will continue to attract more people to the area, which means a better pool of candidates from which to hire.

“I think it’s wonderful,” she said. “The more that [cities] do to move in that direction, certainly from my perspective of hiring people … I think that’s a very positive thing.”