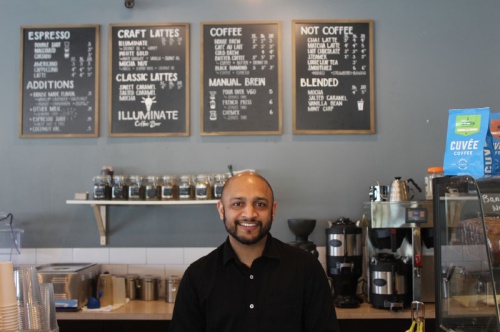 Palak Patel began his foray into the coffee business as a Starbucks barista in California. During a trip to Austin, he fell in love with craft coffee and has not looked back since.


Now the owner of Illuminate Coffee Bar on RM 620 in Austin, Patel spends his days surrounded by coffee lovers who frequent the shop. Illuminate specializes in light-roast coffee, which Patel said is more caffeinated than dark roasts.

“In the roasting process, the more you roast the beans, the oils come out, and that’s caffeine coming out of the bean,” he said. “People in this community know we use the light-roast coffee, and they appreciate that because the caffeine is still in there.”

The shop began under the name Caffe Yolly and opened on RM 620 in 2014. A previous owner changed the name to Illuminate in July, naming it after one of the cafe’s popular drinks: the Illuminate, a latte made with honey and coconut oil.

“That’s pretty much our signature,” Patel said. “We use coconut infused into our milks, so that’s why most people come here: to try our Illuminate.”

Patel purchased the shop in January after his previous shop, Sage Cafe in South Austin, closed due to raised rent. With 10 years of experience working in coffee—a resume that includes roasting coffee, owning two other shops and working as a barista—Patel has high hopes for the future of Illuminate.

He said he is hoping to add beer and wine to the menu and start offering coffee tastings and roasting classes. The shop, which currently sells coffee from local roasters including Cuvee, Cianfrani and Wild Gift, plans to start selling its own brand by winter, Patel said. If all goes well, he said he will open another location in the Austin area.

Patel said he has no plans to leave the coffee business any time soon.

“Coffee makes people happy,” Patel said. “They start out their day with coffee. ...There’s always great conversation around a cup of coffee.”