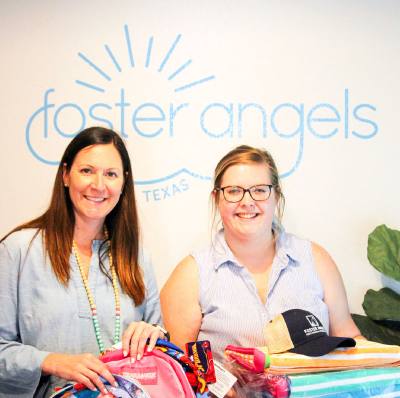 Tania Leskovar-Owens (left) and Maggie Sheppard pose with some of the items they will give to foster children in Central Texas.

Gift cards may seem impersonal to many, but to Foster Angels of Central Texas marketing manager Maggie Sheppard, they are a crucial tool of her organization’s operations.

“I always touch on that, because … giving a child the opportunity to pick out their own clothes is an incredible opportunity that is actually very personal,” Sheppard said.

The Foster Angels brand of philanthropy has operated in Texas for 20 years. It started in Corpus Christi through Foster Angels of South Texas, then branched out to Central Texas in 2010.

Essentially, the organization is kind of like the Make-A-Wish Foundation for children in foster care, and Foster Angels Executive Director Tania Leskovar-Owens said she’s heard the comparison before.

On a recent record-setting week, workers fulfilled more than 75 requests on behalf of foster children throughout Central Texas, and they average 50-60 requests per week.

Gift cards are a major component, but the organization also helps provide shoes, laptops, backpacks, bicycles and even cars.

Services also figure prominently, and staff work to provide checks toward lessons and tutoring, and there is also a scholarship fund.

An important function of Foster Angels is to help support other organizations such as social workers or Court Appointed Special Advocates, or CASAs, which is a national association that supports advocates for abused or neglected children in need of a safe environment. Sheppard said staff will get calls from frustrated CASA volunteers who are at the end of their rope.

“There was a call from a CASA [volunteer] the other day, and they were ready to fight,” Sheppard said. “They were like, ‘I have a kid that needs this and this is why they need it.’ And we were just able to say, ‘Yep, we can do that.’ The kids they serve get told ‘no’ a lot, and then they call us and we say yes … We are the ‘yes’ people.”

For much more detailed information on Foster Angels of Central Texas and to learn about volunteer and donation opportunities, visit www.fosterangelsctx.org, email [email protected] and call 512-732-2329.
SHARE THIS STORY