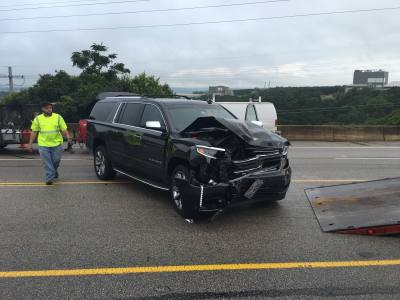 Lake Travis-area resident Erik Okerholm was involved in a collision in 2016 on RM 620.

Editor's note: House Bill 2814, which was referenced in this story as part of traffic safety legislation, failed passage in the Legislature after the press deadline for this story.

Erik Okerholm has been driving on RM 620 for years. Seven of those involved a commute about four days a week from Oakbrook near Avery Ranch to Steiner Ranch. On May 16, 2016, after dropping his kids off at Canyon Ridge Middle School, he was sitting in his late-model black Suburban in the northbound lanes of RM 620 pretty much at a standstill.

While waiting, he was tending to some business and talking on his phone’s Bluetooth setup when he noticed a white car skidding toward him at high speed from the southbound lanes. He braced for impact and was struck. As he describes it, his car was “reverse T-boned” and knocked into the center lane of the thoroughfare.

“I checked myself for blood and piercing,” Okerholm said. “I didn’t find anything. ... All of the airbags in the whole car went off and totaled the car.”

Okerholm had just gotten married two days prior. He got out of the car and called his new wife, April, who rushed to the scene of the incident. He rode alone in the ambulance to the emergency room and was told to go home and get some rest, but a couple of days later he said he went back to the ER and was diagnosed with a concussion. His chiropractor also diagnosed him with multiple herniations.

Three years later, Okerholm said he is still dealing with the physical and emotional impacts of the accident.

Okerholm said he wants RM 620 fixed and made safer, especially at the bend in the road where he was struck. He is not alone. Be it through forming action committees, speaking with local and state officials, and even a growing trend in social media pages centered on traffic safety, residents of the Lake Travis-Westlake area have become increasingly more vocal.

On March 26, Bee Cave City Council voted down a resolution seeking a speed study from the Texas Department of Transportation. The study called for a new maximum speed of no more than 50 mph on state roadways within Bee Cave.

The motion failed on a split 3-3 vote. After the meeting, Mayor Monty Parker expressed his frustration.

TxDOT recently reduced the speed limit west of Bee Cave city limits on Hwy. 71 from 60 to 55 mph, and so a reduction to 50 mph on state roads within city limits makes perfect sense, Parker said in an email statement April 13.

He added it was especially disappointing because Bee Cave Police Chief Gary Miller recommended passage and advised in his professional opinion that a reduction in speed from 55 to 50 mph would make it easier for motorists to slow or stop their vehicles and help reduce the frequency of collisions and potential for injury or death.

Also on the Bee Cave City Council agenda that night was a resolution to endorse House Bill 2814, a bill from state Rep. Vikki Goodwin, D-Austin, that calls for safety corridors on certain segments of state roads deemed highly dangerous and doubling fines within those corridors.

That resolution saw no action, as no one on council made a motion to vote on it.

In attendance at that meeting was Greg Short, president of the traffic safety advocacy group Safer71, which was created in November and has been working with local, regional and state officials to make the stretch of Hwy. 71 in western Travis County less prone to car collisions.

Safer71 has been working with Goodwin to build support for the bill which, according to Goodwin’s Constituent Services Director Susan Nelson, is still on the list to be considered for a floor vote in the Texas Legislature.

Since there are many bills on the list, Nelson said, it is uncertain when or if the bill will make it to the House floor.

Regardless of whether it passes, the bill and other policy proposals like it are becoming more popular among Lake Travis-Westlake-area constituents and activist groups.

At the March 26 Bee Cave City Council meeting, Short requested the motion on speed limits within Bee Cave be amended to say speed limits can go no higher than 50 mph on state roads.

Both resolutions failed in Bee Cave that night.

Short said road safety is a complicated topic because everyone has different ideas and experience on how to solve problems.

Whether it is the perception of rapid growth, speed limits that are too high, substandard engineering on roads or bad drivers themselves, Short said from its inception Safer71 has been trying to approach the broadest possible range of community residents and government agencies in identifying solutions. He said the failure of Bee Cave to pass the two motions in no way diminishes Safer71’s desire to continue working with the City Council and TxDOT on road safety.

“It’s an unfortunate reflection of the complexity of getting alignment within the community on how to solve these problems, and we hope that as Bee Cave looks to its future, that they will continue to think about how it can best advocate with other governmental agencies to ensure road safety in the region,” Short said.

Bee Cave Council Member Jon Cobb was one of the “no” votes on the speed limit study, and his reasoning for his vote is multifaceted but largely centers on government oversight. In the case of the speed limit study and reduction, Cobb was hesitant to vote yes due to the wording of the motion, which created a ceiling at 50 mph but no floor.

Regarding the resolution to endorse Goodwin’s bill on safety corridors, HB 2814, Cobb said there are several reasons he could not endorse it and cited the potential devastating economic impact of a doubled fine on lower-income drivers as well as his belief the bill is based more on emotion than logic.

“This is a prime example of people pandering to people’s feelings,” Cobb said. “If you logically walk through the steps of a safety corridor, it makes absolutely no sense. However, if you interject your feelings into it, it makes a lot of sense because it feels good. But government shouldn’t be in the feel-good business. Government should be in the thought business.”

Former Lakeway resident Julianne Fletcher’s brother, David Case, was killed in November after he was struck by a vehicle on RM 620. Case was riding his bicycle to work at Randalls in Lakeway early in the morning Nov. 3 when he was hit.

Fletcher said her brother felt safer on a bike than in a car, and once she heard about Goodwin’s bill on safety corridors, she said she believes a safety corridor in the area where Case was struck by a vehicle could have possibly led to a different outcome. Since Case was killed last year, two more people have died in car collisions on RM 620 in 2019.

“I don’t believe he would have stepped in front of a car if he had seen it coming,” Fletcher said. “But, when you’re going so fast that you just don’t realize someone has stepped into the road and can’t stop, there really needs to be some way to make people aware of areas like that that are heavily trafficked or that are dangerous.”

Dan Christensen is another proponent of increased traffic safety, especially on RM 620. He is a personal injury attorney who runs a law firm called DC Law, and has created a Facebook group called Let’s Fix 620.

“The increase in community activism regarding this issue is the result of people getting sick of watching their neighbors and their friends and their loved ones getting killed on this road week after week,” Christensen said.

He said he has multiple clients, including Okerholm, who have been severely injured on RM 620. He recently scheduled a meeting with Goodwin’s office to try to get a dialogue going about the dangers of RM 620, but he said any immediate solutions are going to be difficult since the state Legislature is now in session.

Beyond Let’s Fix 620, there are many other social media pages in western Travis County devoted to traffic safety. Stephanie Fitzharris is a co-administrator of the Facebook page 620/71 Accident & Traffic Report. The page was created Oct. 29 following the traffic death of Michael Babineaux on Hwy. 71, which was also the reason for the creation of Safer71.

Fitzharris said the page has been a useful tool for residents to not only avoid traffic congestion caused by accidents in the area, but also to give people a broad picture of safety issues throughout the roads of western Travis County.

Fitzharris said she endorses politicians and officials such as Goodwin and Travis County Constable for Precinct 3 Stacey Suits, who appear to be taking seriously residents’ traffic concerns.

“We’ve had enough,” Fitzharris said. “We are done electing people who refuse to do anything about our traffic concerns, and they pass the buck.”

When it comes to the rising activism in western Travis County centered on traffic safety, Short said he believes residents want clear plans and solutions from their local and state representatives.

“Whether it’s formal organization like [Safer71] or less formal organization such as social media groups, I think that in either respect, our goal is to ensure our elected officials and government agencies have a clear understanding that we’re not going away,” Short said.
SHARE THIS STORY

The city of Lakeway and Bee Cave Chamber of Commerce are putting on two holiday events in Lake Travis-Westlake on Dec. 4.

Families can head to West Lake Hills this weekend to enjoy Westlake Wonderfest for free.