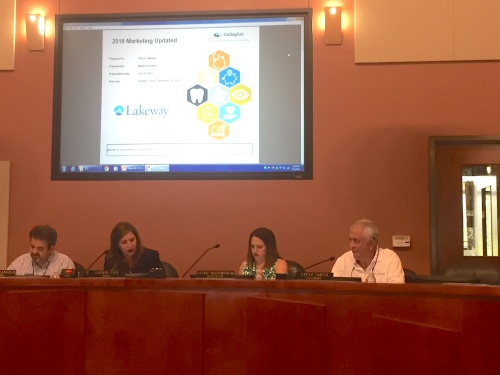 Lakeway officials met at City Hall on July 15 to continue talks designed to tighten the city’s budget moving into an official adoption planned for Sept. 18.

City Manager Steve Jones presented property tax revenue figures for the city, showing a total ad valorem tax rate for 2020 to be $0.1698 per $100 of valuation for a total property value pool of about $4.99 billion. Though not yet official, the budgeted 2020 tax rate is slightly higher than 2019, which was $0.1645. Jones said the official ad valorem tax rate will be proposed Aug. 5.

Total expenditures for Lakeway for 2020 are budgeted at $15.11 million, up from $14.93 million projected for 2019, and Jones said while the budget is not yet official, he does not predict the 2020 numbers to change substantially.

Jones said he will likely have a provider recommendation for council during the next budget workshop July 29.

Another topic of discussion during the workshop was the Lakeway Activity Center, which is projected to receive $344,550 in revenue and accrue $655,199 in expenditures for fiscal year 2019, resulting in a revenue recapture rate of about 53%. A 50% revenue recapture rate or more is a policy Lakeway City Council set for the activity and swim centers in 2018.

For 2020, the Lakeway Activity Center is budgeted to bring in $347,050 in revenue and accrue $706,393 in expenditures, which would result in a revenue recapture rate of slightly less than 50%.

"What we're trying to do now is figure out how to keep up our revenue as expenditures increase," Lakeway Parks and Recreation Director Andra Bennett said.

The roughly 90-acre Hamilton Greenbelt is another large cost looming over the 2020 Lakeway budget. Lakeway City Forester Carrie Burns told council the cleanup would help remove dead and downed trees that are creating a fire hazard throughout the greenbelt and remains an effort that has been neglected for several years.

Burns told council if Lake Travis Fire Rescue took over the job, the cost would be $1,700 per day with a crew of 8 people working for 207 days and totaling $352,682. Compared against outside contractors, that cost could be as high as about $1.15 million, or $4,065 per day for 282 days, she said. However, if the city elects to incorporate a network of volunteers into the cleanup effort working with LTFR, the price could run as low as $326,330, according to Burns.

"Hamilton Greenbelt is our No. 1 priority because of the number of homes around it," Burns said.

Mayor Sandy Cox said she would like to see a priority list from LTFR, and City Council will revisit the issue at some point during the current budget session.
SHARE THIS STORY