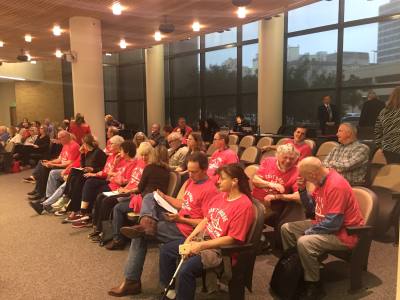 Travis County Commissioners were expected to vote Tuesday on a proposed bridge over the low water crossing. However, following the city of Bee Cave’s Jan. 28 vote to pursue annexation of the property, county commissioners instead opted not to move forward with the project.

"We probably won't bring it back," said Travis County Commissioner Gerald Daugherty. "Bee Cave is [likely] going to annex this low water crossing. After that, [the future of the low water crossing] will be up to them."

Several residents said they want the city of Bee Cave to determine a solution to the low water crossing in their neighborhood.

County plans called for a bridge between 510 and 570 feet in length. The structure was proposed to include two 2-foot shoulders, two 12-foot lanes and one 5-foot sidewalk.

County voters approved funding for the bridge in a $185 million 2017 bond package. The project’s cost—currently estimated at $6.2 million—is not final. Since passage of the bond, the county has updated design recommendations for bridges, detention ponds and other drainage structures, based on new rainfall data released by the National Oceanic and Atmospheric Administration.

It's unclear at this time where the funds will go if Bee Cave annexes the property and the county does not move forward with the project.

In January, Daugherty issued a survey to Homestead residents. The survey asked one question: Do households support or not support a bridge recommended by Travis County attorneys, engineers and staff?

“I wanted to try to respond to the overwhelming number of [opinions] whether that be to build the bridge or not build the bridge," Daugherty said. "I’ve known for years now just how controversial this subject can be.”

Just over 83 percent of Homestead residents participated in the survey, and of those respondents around 78 percent said they do not support the bridge as currently recommended by the county, Daugherty said.

“What you’ve seen this morning and is proven by Commissioner Daugherty’s survey is that the vast majority of people don’t want the bridge," said 36-year Homestead resident Rick Scadden. "Please cooperate with the city of Bee Cave to allow them to proceed with annexation of the property.”
SHARE THIS STORY