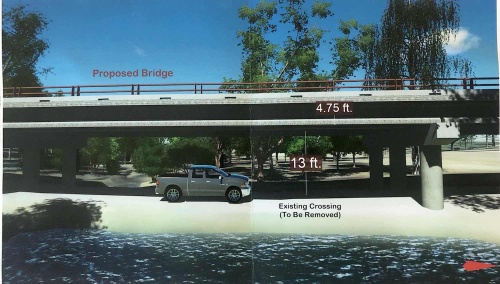 Residents of the Homestead subdivision in Bee Cave south of Hwy. 71 are working to poll their neighbors regarding a Travis County-proposed bridge on a low water crossing on Great Divide Drive. It’s a piece of infrastructure that some see as necessary to protect against flooding and others say will do more harm than good.

The grassroots effort has intensified following the Jan. 5 issuance of a memo from Travis County Commissioner for Precinct 3 Gerald Daugherty informing residents that they will be receiving a survey consisting of one question: Do households support or not support a bridge recommended by Travis County attorneys, engineers and staff?

That means 13 inches of rain in a 24-hour period, what was once a 500-year storm, is now classified a 100-year storm, or a storm that has a 1 percent chance of occurring during any given year, according to NOAA.

Many Homestead residents are saying the one-size-bridge-or-nothing option with which they’ve been presented is too extreme and invasive for a neighborhood that prides itself on its rural aesthetic and feel.

“I’m not sure I’d refer to it as a bridge as much as I would an overpass,” said Marie Lowman, Homestead resident and Bee Cave City Council member. “That bridge is half the length of Pennybacker Bridge (on Capital of Texas Hwy. in Austin).”

Lowman said for a subdivision in Bee Cave that has 187 households and roughly 600 residents, it doesn’t make sense to build a multi-million-dollar bridge on a roadway that at most supports about 1,000 motorists per day.

“Compared to what those funds could do elsewhere in the county, as a council member I find it fiscally irresponsible, almost reprehensible,” Lowman said.

She added one potential option she would like to see the county endorse that could also serve as a compromise between those on both sides of the issue would be an elevated pedestrian bridge running alongside the low water crossing.

Renderings were sent with the county memo showing the proposed bridge would be between 510 and 570 feet in length with two 2-foot shoulders, two 12-foot lanes and one 5-foot sidewalk. According to the renderings, cars driving on the proposed bridge would be about 18 feet above the lowest part of the creek where the existing low water crossing sits.

Homestead resident Lance Clawson owns property that would be directly impacted by the proposed bridge. Clawson said he consulted with a realtor who informed him his property could devalue anywhere from $200,000-$500,000 if the proposed bridge is installed in place of the low water crossing.

“We will be fine without a bridge,” Clawson said. “The whole issue when all of this started is everyone thought it was going to be this cute little bridge that was raised about two feet where if we were trapped in we wouldn’t be trapped in very long and it wouldn’t be that big of an issue.”

One statistic from county officials that several Homestead residents point out, including Clawson, is that rising waters at the low water crossing force road closures 1.7 times per year on average. To Clawson and others living in the area, that is not enough of an inconvenience to install what they see as an invasive piece of infrastructure.


A long history of division

Daugherty said that he doesn’t want to build anything that Homestead residents don’t want, but the option provided makes the most sense if there is to be a bridge to replace the low water crossing. A major reason the bridge is such a focus is because there is only one entrance and exit to the Homestead, he said.

“I think that if the bridge is going to get built, it will be for the 500-year flood because what we are basically setting up is the Atlas 14 flood plain map that will be coming our way pretty soon,” Daugherty said, adding that a bridge constructed to stand up to a 500-year flood is likely what county engineers will want to impose.

For the most part, Daugherty said, the county has left the matter alone until 2017, when a Travis County study of high-priority stream crossings and a Nov. 7 passage of a $185 million bond package put the Great Divide low water crossing back on the radar. According to Daugherty the most recent cost estimates for the bridge come in at about $6.2 million, but he said that number is not final.

Shortly after the bond passed, Homestead residents asked Bee Cave City Council to annex the sliver of land encompassing the crossing in order to protect against county enforcement of a bridge. Then, as now, Daugherty said he wanted to come up with a plan that would be accepted by the majority of residents.

The county still owns the low water crossing, and Daugherty’s memo states he wants a 75 percent return rate for his survey from Homestead households. Of those responses he said he wants to see at least 75 percent either for or against the bridge before he would make a motion before the Commissioners Court.

Since receiving the memo Saturday, Jan. 12, a group of Homestead residents called Don’t Bridge the Great Divide has begun a neighborhood poll. Committee member Morgan Bender said they aren’t finished gathering responses yet, but so far numbers are aligning overwhelmingly against the proposed bridge.

“The unassuming nature of the Homestead is what we really enjoy,” Bender said. “To completely change that on unwarranted and unnecessary reasons, we don’t think that’s fair to us, nor do we think it’s fair to everyone in the county to be asked to pay for it when the majority of us don’t want it.”

Bender added that she would welcome a bridge, just not one that is so big and invasive. Most people in the neighborhood want a solution, she said, just not that one.

Lowman, Clawson and Bender maintain they don’t want the bridge as it is proposed, but Bee Cave Mayor Monty Parker said he is for it, and lists his primary reason as public health and safety.

“You can argue property values all day long. You can argue convenience and looks, and all of those are arguments, but public health and safety has to trump everything in my opinion because that’s life or death,” Parker said, adding emergency responders including representatives from ESD No. 6 and the Bee Cave Police Department have said a bridge is needed. “I’ve had it thrown at me often that nothing has happened in 35 years. Well, thank god nothing’s happened in 35 years. But that doesn’t mean something can’t happen tomorrow.”

The deadline for residents to return the survey is Jan. 28. Daugherty said he will likely bring the results to the Feb. 5 Commissioners Court meeting, and depending on the results he could introduce a motion to vote on the matter that day.
SHARE THIS STORY