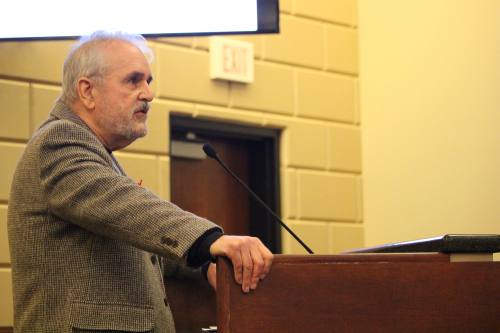 At Bee Cave's Dec. 11 City Council meeting, Adrian Overstreet discusses the addition of a sidewalk to a connector road being being build between Ladera Boulevard. and Bee Cave Parkway.

Following approval in early October of construction of a private-access drive connecting Bee Cave Parkway to Ladera Boulevard, Bee Cave City Council on Dec. 11 authorized the installation of sidewalks and improvements within the future right of way.

City documents state the total property is 23.7 acres with construction limited to 8.6 acres. The new site plan for lot 1A, block B of the Home Depot addition subdivision calls for the addition of a 10-foot sidewalk along the length of the roadway and that it connect to the existing sidewalk on Ladera Boulevard.

Landowner Adrian Overstreet told the city he would like to build the sidewalks himself rather than have the city build them. Overstreet also said his desire to include sidewalks came from talks with Ladera residents who told him they were an essential addition to the roadway for pedestrians.

At the time of a future plat submission the landowner relinquishes the completed right of way to the public, at which time the city of Bee Cave will assume maintenance responsibility, a city document states.

The administrative approval of a site plan amendment for the roadway is the next step in the creation of a long sought-after link between the two major thoroughfares. Residents of the Ladera neighborhood have been calling for a connector road for several months prior to the October approval of the roadway, stating it would help reduce traffic in the area.